You should know that the popularity of dirt bikes started way back in the 1960s. From that time, they have become more widespread as more and more riders embrace the idea of dirt biking. As such, individual riders took to modifying their bikes for off-road capabilities in a bid to outdo their potential biking rivals. 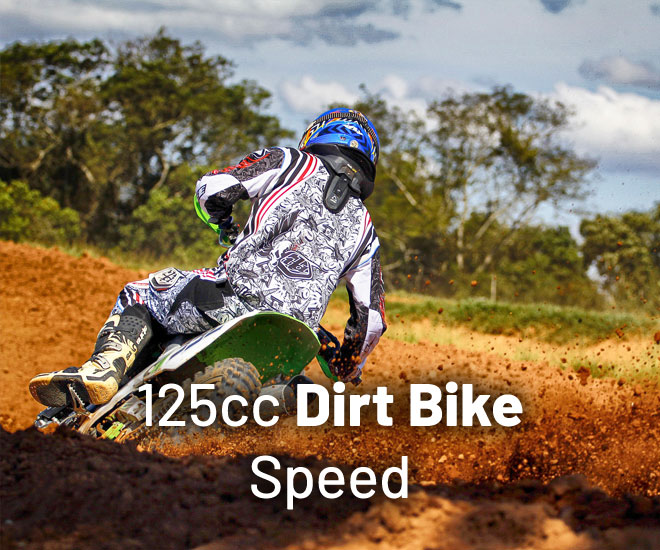 Prior to the advent of mass production of off-road bikes in the middle of the 20th century, off-road biking enthusiasts opted for riding regular street motorcycles onto rugged terrain.

Inasmuch as this was the only option, riding in off the paved roads was met with a lot of obstacles. For instance, riding in the sandy or muddy conditions would subject most of the riders to getting stuck most of the time.

These problems compelled motorbike manufacturers to find a workable solution. And at the height of World War II, dirt bikes became the talk of the town.

Their ability to be driven in almost any terrain motivated bikers to take their adventures anywhere, including forests and unpaved areas. Towards the end of the war, more light bikes came into existence.

That being said, the evolution of dirt bikes has always been a gradual process. At the moment, the speed matters the most in addition to other factors that make dirt bikes a preferred choice by those who adventure in unpaved places. And this brings in the question of how fast 125cc dirt bike can go.

Dirt bikes that have the 125cc engine capacity are said to have top speeds ranging from 55 to 60 miles an hour. Downhill road conditions and heavy riders can help the operating speed go beyond this range. But dirt bike manufacturers do not recommend riders to let this happen intentionally for safety reasons.

Most of the dirt bikes with the engine capacity of 125 cc have their horsepower ranging between 5.9 and 7.8 at a whopping 7500 revolutions in one minute (rpm). These bikes feature single cylinders with 4-stroke engines, the most modern type of engines one can think of.

These engines have four major phases which include the intake, compression, power, and exhaust in that order. Learn more about the factors that make these bikes to attain a speed of up to 60 miles per hour in the following sections.

Factors that Determine the Speed of a 125cc Dirt Bike

Have you ever attended the dirt bike races? If you have you must have overheard gossips and allegations about which rider or dirt bike was the fastest on a given terrain. These bikes come in different sizes and different engine capacities.

However, the average speed of these bikes varies according to engine size, sprocket gearing, modifications, and many other underlying factors. Here is a comprehensive description of what determines the speed of dirt bikes, especially those with 125cc engine size.

As mentioned earlier, all types of motorbikes come in different engine sizes. This factor plays a very crucial role when it comes to the speed and horsepower of the bike.

Needless to say, the standard dirt bikes have their engines ranging from 50cc all the way to 140 cc. Most of the manufacturers go the extra mile of producing other versions with engine sizes ranging from 175cc to 250 cc but these engine capacities are way beyond the standard motorbike class that typifies dirt bikes.

To keep abreast with other types of bikes such as bit bikes, dirt bikes are designed to reach the maximum revolution per minute (rpm) faster in each gear. When riding on short sections using the lower gears, the top speed may range between 15 and 25 miles per hour if it is a 50cc bike. But on longer sections, the bike can attain a top speed that is in the range of 50 miles per hour.

When it comes to 125cc dirt bike (complete with the stock sprocket gearing) you should expect to reach 70 miles per hour top speed when riding on high gear. Therefore, the engine size is a key factor that will determine the speed with which your dirt bike will go.

You need to know that the smaller front drive sprocket and larger rear sprocket gearings are capable of producing the base ratio gear for your dirt bike. This is done by the manufacturers in a bid to target more consumers on the market today.

The base gear ratio is achieved by simply setting up dirt bikes with a sprocket gearing combination that is capable of providing you will the overall performance.

When you use the engine revolutions per minute red line as your benchmark, you will realize that the average speed of (for example) of a 50cc dirt bike ranges from 22 to 25 miles per hour.

This observation is based solely on the 15 miles per hour top speed when you engage the first gear.

On the other hand, you may achieve the 50 miles per hour top speed when using the gear. This tells you that when you apply the same red line benchmark to your 125cc dirt bike, the average speed is likely to come to 35 miles per hour. From this information, you can easily tell that the sprocket gearing on a 125cc dirt bike is one of the driving forces of how fast it can go.

Modifications are crucial when it comes to increasing or decreasing the speed of your dirt bike. In this regard, increasing speed is the only positive way of looking at it. After all, everyone wants to have their dirt bikes going reasonably faster than their competitors.

Supposing you want to increase your bike’s average speed without compromising its low-end torque acceleration, how will you achieve this feat? The answer is simple and clear. You will start by replacing one of your dirt bike’s stock sprockets.

Quite a number of 50cc race mechanics would prefer a gain of not more than 3 miles per hour average speed exceptional as a way of improving the bike’s speed. That is not a bad idea considering that dirt bikes are designed primarily for the most difficult of terrains that no other ordinary bikes can survive.

By adding 5 miles per hour to your 125cc average of 35 miles per hour, you will be creating the difference between being in the first group of bikers or in the middle during dirt bike expedition.

In other words, understanding how the sprocket gearing works gives you an idea of increasing your bikes’ average speed without really compromising torque acceleration.

The torque acceleration, in this regard, is necessary to help your bike gain top speeds in a matter of minutes or seconds. Modifications can improve the speed of your dirt bike by a large margin and set you ahead of other riders.

For you to know the average speed of your dirt bike, you can turn to time trials. This type of trial was designed to help riders in establishing the exact speed their dirt bikes can go.

To get the real results, you will have to start by defining a course (of a specific distance) and then enlisting a novice dirt bike rider, a timekeeper and an expert rider.

Allow each rider to go for at least three laps on that particular course in order to obtain the average data. Once you are done with this exercise, you will be amazed to realize that the data you have obtained is likely to correspond with the calculations based on your dirt bike’s engine size as well as sprocket gearing.

In the end, you might come up with a conclusion that says the average speed in miles per hour for your dirt bike is directly proportional to the rider’s experience and level of expertise.

For the safety aspect of these bikes, you can easily say that the slower speed of dirt bikes, when compared with the larger bikes, can be interpreted as a deliberate move on the manufacturers’ part.

In simple terms, your safety concerns while on your dirt bike depend on the manufacturers’ specifications of the same model of bikes. These time trials play a significant role in ensuring that you know the top average speed your 125cc dirt bike can go regardless of where you are riding it.

From the discussion, you can easily tell how fast your 125cc dirt bike can go. The average speed that this type of bike can attain is between 55 and 60 miles per hour depending on the terrain.

The speed could even go beyond 60mph if you are riding downhill but the manufacturers of these bikes caution riders against going beyond the average top speed for safety reasons.

For your dirt bike to reach such speed limits, you need to consider certain factors. These factors include the engine size(in this case the engine size is 125cc), sprocket gearing, modifications and time trials among others.