Dirt bikes are recreational vehicles, and they range in size and power depending on your needs. Riding a 50cc bike can be convenient and fun. These types of bikes are the highly powerful machine you can use without getting a special license. 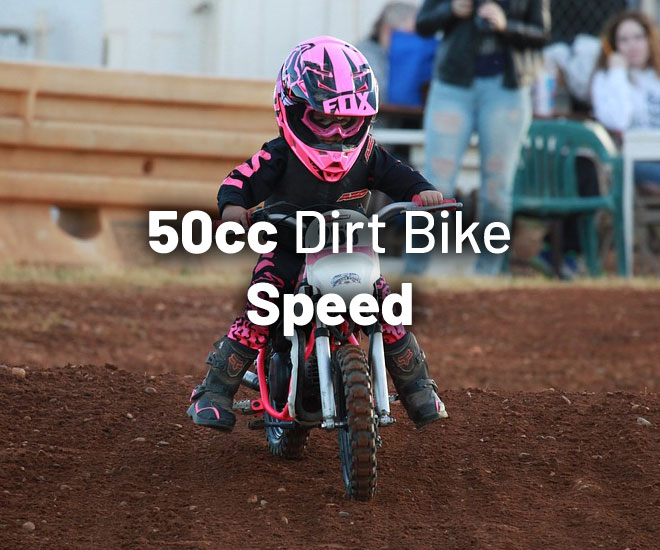 They are fairly inexpensive and use gas efficiently. In some areas, these bikes are even street legal. You can choose to upgrade the speed by reconfiguring some components of your 50cc dirt bike.

How fast is 50cc dirt bike? Most of the 50cc dirt bike models are configured to reach speeds between 25 to 40 miles per hour. These bikes are targeted for users between 5 to 7 years. The pace may seem fast for kids of this age although, during normal riding, they will probably not reach the maximum speeds.

You can limit the speed for your children by setting the bike’s throttle limiter in addition to maintaining it in second gear.

Which is the Safest Speed for Kids?

Before worrying about the speed with which your kid’s bike is on, ensure you have fitted them with sufficient protective gear. Dirt bikes have the potential to run wild, so it is vital to ensure your children are well-protected.

Your kids may not try to go for the maximum speed, but it is still important to prevent the occurrence. Do not expose very young kids to the sport. Let them be at least 5 or 6 years of age.

Guide them to the second gear and make it clear that they should not go beyond that. This action will put a strict limit on their bike. For peace of mind, you can refrain from showing them how to switch to the third gear.

Having a dirt bike with the potential for high speeds poses its own kind of risks. Amateur riders at times get caught up in what is called “Whiskey throttle”. It occurs when a rider pulls back on the throttle and get terrified due to the speed and freeze up.

Sometimes, the child is not aware that they should let go of the throttle for the bike to slow down, and the high speed causes them to hit an obstacle and fall.

When purchasing a throttle limiter, opt for an easy-to-use one like the Yamaha TTR50 where you screw in the bolt that juts out under the throttle.

Is Dirt Biking a Safe Sport for Children?

No activity is 100% risk-free. The lure of dirt biking is that your kids will be outdoors and will learn many useful tricks during riding. We all desire a healthy and fun childhood for our children, and dirt biking is one of the ways to do that.

Expect a sprained ankle and a broken bone although you should go the extra mile to protect them as much as is possible.

The question then becomes how to make dirt bike riding safe. Kids older than six years should be allowed to experience the exhilarating sport that is dirt biking.

Keep the dirt bikes clean and well-maintained so that your kids ride on safe vehicles at all times.

Trail riding should further be supervised at all times. More safety tips you can include are:

These rules will help you keep them safe and make you less worried when they are on the tracks. There is no reason than dirt biking cannot be a family affair.

How Much Maintenance will 50cc Dirt Bike Require?

A well-maintained 50cc dirt bike from a solid brand can provide up to 15 years of use without significant repairs. The bike is generally easy to use and reliable. The maintenance steps you can undertake are:

How to Design 50cc Dirt Bike to go Faster?

You can implement some modifications to make 50cc dirt bike go faster with the steps below:

The process of boosting the speed on your dirt bike maybe fun, but you need to observe some guidelines.

Modifications to increase the speed of 50cc dirt bike cannot be guaranteed to offer 100% safety. Any configurations must be implemented with caution in addition to detailed research of your specific model and brand.

Aim to double-check your parts to make sure they are in good order before riding. Modifying your dirte bike will void most warranties of different manufacturers.

Modifying a dirt bike may alter its categorization to small motorcycle which will then require a license. Consult the DMV for any specifications you may need to know.

Dirt Bike vs a Used Dirt Bike – Which to Purchase for Kids?

If your kid is only five or six and just venturing into dirt bike riding, you will most likely go through several bikes before they even get to their teenage years.

It is important for a kid to be on a bike that is fit for their size for safety reasons. Kids, therefore, have to change bikes with age and growth.

Dirt bike riding is not the cheapest sport out there. It is, however, possible to venture into the sport without breaking the bank. Buying a new bike has its share of advantages.

The model will be covered by warranty, and there is often some level of servicing provided within the initial six months of ownership.

The bike will be in good condition, and if they outgrow them, you can always resell them with reasonable market prices.

If you are budget-conscious, you can look for a used dirt bike to start your kids with. Maybe you are of the opinion that the sport is a passing passion for your kids and you are uncertain if you should spend much money on it.

Dirt bike communities are typically close-knit so you can ask around for a preferred model. A used bike may need some configurations or an upgrade of some parts.

50cc dirt bike is a good beginner option, which is why it is marketed for kids. The bike typically moves at speeds between 25 to 40 miles per hour.

Most parents are apprehensive about putting young children on dirt bikes and for a good reason. Dirt biking has its own risks, and it is only natural to be wary of dangerous pursuits.

Kids on bikes should wear protective gear at all times. In addition, you can use a throttle limit to limit the speeds your kids can go. Put them on second gear for reasonable speeds.

Two-wheelers have been established to be safer than four-wheelers, and you should encourage your kids to only use off-roads.

You can also boost the speeds of 50cc dirt bike, although these modifications should be done with caution. As long as you follow the protective guidelines, it should be safe for your kids to ride on trails.