Apollo has been in the dirt bike market since 2005, and they are best known for bikes that accommodate various budgets. 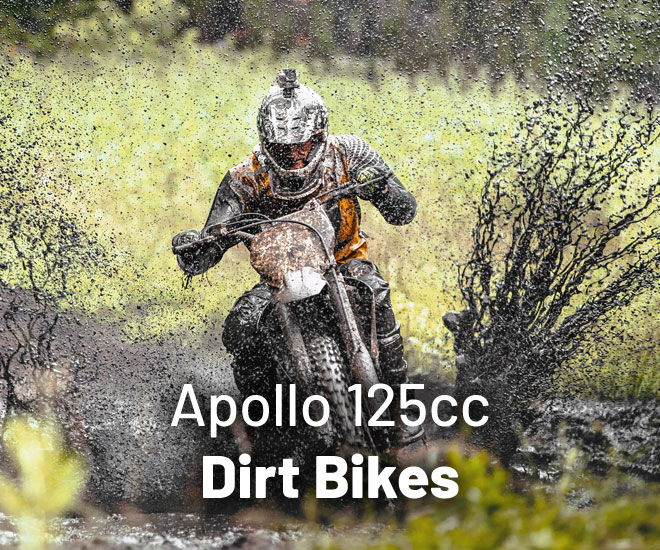 You can get a cheap or expensive Apollo dirt bike, depending on the amount you want to spend. 125cc dirt bikes can be used by teens and adults, as long as the necessary safety precautions are taken. Here is a review of Apollo 125cc dirt bikes below:

The Apollo DB-X18 125cc dirt bike is ideal for learners, although experts can also use it for short rides.

It derives its power from a four-stroke 125cc engine that can deliver a torque of around 7,500 RMP. Its top speed is 55mph, and you can expect a good pace on the street and minor trails.

The bike has a four-speed manual clutch transmission. The front and back brakes use hydraulic discs to bring the bike to a stop.

The Apollo DB-X18 is both lightweight and sturdy. Its heavy-duty steel frame makes the model incredibly resilient and durable even in rough terrains.

Since you can change the air filter, you don’t have to worry about taking the motorcycle to dusty trails. The bike comes in various colors, including green, red, and blue.

The model’s gross and net weight is 180.8 lbs and 147.7 lbs, respectively. Adult riders can easily manage and control this bike on the road. Its fuel capacity of 1.03 gallons will be adequate for minor trails.

You should consider the bike’s seat height of 36.5 inches before buying it, as it is ideal for riders from 5.2 inches. The motorcycle can handle a load of around 220 lbs.

This bike provides a smooth and controllable power. Its air-cooling system will come in handy in rough terrains and bumps since the motorcycle will remain cool.

It does not produce loud noises even when climbing hills, and you will not disturb other road users. The riser handlebars are adjustable, making the bike easy to maneuver.

It is started with a kick, and it also has the Ignition C.D.I starting system.

While this bike is a joy to ride, its carburetor is not as efficient as those on other similar bikes.

The Apollo DB-007 125cc dirt bike is popular for its fast takeoff. Its 14-inch rear tires and 17-inch front tires will speed through rough terrains and bumpy sections.

The heavy-duty frame further ensures the bike’s durability in harsh conditions. The non-rust steel used in the chassis means that you can use the bike for years and years.

The dirt bike is as comfortable as it is capable. The seat is padded with foam, while the handlebars offer a stable and robust grip. Maneuvering a bike has never been as easy as it is with the Apollo DB-007.

The sport red body is striking, and it gives the bike a sporty aesthetic. The Apollo DB-007 has a four-stroke, single-cylinder 125cc engine that produces a torque of 9,500rpm.

An air-cooled system keeps the engine cool to ensure it keeps going for hours. The bike can reach top speeds of 55 mph, although you should expect lesser speeds in rough terrains.

This bike has a seat height of 28 inches and a gross and net weight of 185 lbs and 148 lbs, respectively. Its tank capacity of one gallon is adequate for short trips.

You will need to assemble the bike, and it can get confusing due to the many spare parts provided. It is also hard to clean the carburetor since it does not open.

The Apollo AGB-37 125cc is a perfect bike for beginners. It has a moderate amount of power that will not intimidate amateur riders. The model will serve you well as a pit bike, and it is quite capable of fast speeds.

This bike is quite big, but adults and the youth should have no trouble handling it. Its seat height is 32.28 inches from the ground. The bike is lightweight for secure handling, and it is forged from high-quality steel for durability. You can get it in either red or black.

The power plant of the Apollo AGB-37 is its four-stroke single-cylinder 125cc engine. The motor has a horsepower of 6 KW and a maximum torque of 9.0/5500.

The bike can reach speeds of 55.89 mph on flat terrain, and you can switch between its four gears. It is equipped with an air-cooling system to keep the motor cool even when you are doing climbs.

Another notable feature of the Apollo AGB-37 is its suspension system. You will be spared of extremely rough landings since the system will absorb most of the impact.

The bike has chain driving wheels and knobby tires that are ideal for harsh terrains. The rear tire is 12 inches and 14 inches for the front tire.

Its hand-operated front brakes and back brakes are very responsive when you need to stop the bike. The bike’s net weight is 149.6 lbs, while the gross weight is 180.4 lbs. The fuel capacity is 3.5 L.

You will need to assemble the Apollo AGB-37 as it does not come pre-assembled.

Some riders have reported pushing their dirt bikes to almost 80mph. Faster bikes tend to be more expensive, and the speed of your model will, therefore, depend on the amount you will spend.

Two-strokes and four-strokes also differ when it comes to speed, and the latter have typical speeds of between 35 to 55mph. Two-stroke bikes are generally faster, and some riders have reported that their models can reach speeds of 100 mph.

Typically, a two-stroke bike will have higher speeds in comparison to a four-stroke of similar cc. Keep in mind that two-strokes are not designed for long trails, and they will only go so fast until the engine stalls.

The acceleration can be as short as four seconds on 125cc bikes. You are likely to reach the top speed on a manual dirt bike faster than on an automatic one. Two strokes also accelerate faster and are mostly preferred in track racing.

These speeds can be dangerous for beginners and overly-enthusiastic teens. Even if you give the bike to older kids, they may get tempted to push its limits when they are on the field. You can ensure they have protective gear to reduce the risks of falls and injuries.

You can also modify a 125cc dirt bike to get faster speeds. This is mostly done by replacing one of your model’s stock sprockets while ensuring that you do not affect the low-end torque acceleration.

You can get an extra five miles per hour on your bike, which will make a notable difference when you are on the dirt road. Unless you know how the motorcycle’s sprocket gearing system works, however, it is better to let a mechanic do the modifications.

Apollo is a relatively new brand in the dirt bike segment, and buyers may be a bit hesitant to buy from it in favor of more seasoned manufacturers.

Chinese companies are also notorious for using cheap materials, although this does not seem to be the case with Apollo.

Apollo dirt bikes are reliable, sturdy, and durable, and the brand sources high-quality materials. The company does its own testing, research, and development, and parts are developed in-house.

Apollo seems to be committed to product quality, and most customers praise the resilience of their models.

125cc dirt bikes are recommended for 12-year old kids and over. The faster a 125cc dirt bike can go, however, the more level of control the rider will need to have.

Most parents will opt to keep their kids from fast bikes until they are more experienced. The question of speed is further complicated by the fact that riders report higher maximum speeds than those quoted by manufacturers.

How to Maintain Your Apollo 125cc Dirt Bike?

Maintaining an Apollo 125cc dirt bike will demand a lot of diligence on your part. It is best to clean the air filter after every ride to get rid of any debris and dust.

A dirty air filter will affect the effectiveness of the fuel system and engine. Regular oil changes are also recommended.

To minimize the occurrence of flat tires on the road, check the tire pressure beforehand, and invest in backup tubes. You should also change the spark plug regularly.

Apollo makes some pretty decent dirt bikes for every budget. Their 125cc line has three exciting models that will make dirt bike riding a fun experience.

The bike you buy will be informed by whether you want it for racing or making simple trails. 125cc dirt bikes are rated for teenagers, although you should be confident in your kid’s skills before letting them on one.