We all strive to own all-terrain vehicles (ATV) at least at some point in our lives. Despite being great fun for those adrenaline junkies, these vehicles are part and parcel of almost every culture that loves adventure, let alone their convenience. 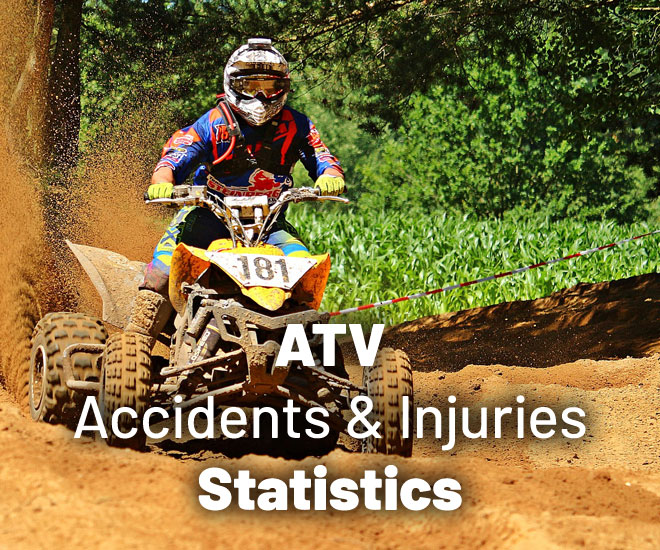 Indeed they are quite great when used properly and safely around homes or property in general. ATV can also be a force to reckon when it comes to offering recreational fun.

With all these positive attributes, ATVs seem to be gaining popularity from one culture to another and from generation to generation across many counties. Given that there are two sides of a coin, the other side of ATVs is not so fascinating, to say the least.

These vehicles can be dangerous and a potential threat to many people if not used properly. That is why this article digs deeper into ATV accidents and injuries statistics to show you the other side of the story regarding their use.

Inasmuch as these four wheelers make it easy for its riders to use them off-road, they are also prone to fatal accidents. Even though accidents are part of your natural environment when people use different types of machines, it doesn’t necessarily imply that you accept the reality of this crucial matter.

Obviously, there must be some underlying reasons as to why ATV accidents and injuries are have become rampant as indicated in the following statistics:

From the statistics, you can understand the magnitude of fatalities and injuries resulting from riding ATVs.

It doesn’t imply that these four wheelers are extremely dangerous or the main cause of this road carnage but it means that if safety measures are not taken into consideration when driving them they can as well become dangerous to the riders, passengers or other road users.

Therefore, a lot of care and training is needed to ensure that cases of ATV-related injuries and accidents are minimized.

As mentioned earlier, all-terrain vehicles are great fun especially to those looking to try out their skills off-road. Anyone can ride them and enjoy a mixture of thrill and fun that comes with these little vehicles.

But are you aware of the common ATV injuries? If not, this is the time to know the truth about the most common ATV-related accidents and injuries that are likely to occur just in case.

The fact that ATVs don’t have seat belts and are a little bit heavier, this makes them dangerous and hazardous to those riders. Here are the injuries you are likely to sustain when driving ATVs:

When riding ATVs, you are hereby advised to wear a helmet in order to protect your head whenever an accident occurs. This is because ATVs are designed without a roof and this could be detrimental to your wellbeing in case you get involved in an accident at high speeds.

Should you opt not to wear a helmet, the repercussions of your action are likely to result in concussions during an accident.

Therefore, you should always rethink of wearing a helmet all the time regardless of the speed with which you are going to ride your ATV. This is due to the fact that concussions can occur no matter how slow or fast you are riding your four wheeler.

Just keep in mind that you are handling an oversized vehicle thus the need to take all necessary precautions if you really care about your safety.

Most of the ATVs weigh between 500 and 600 pounds depending on the size and who it is designed for( either an adult or youth). This means when your ATV flips on you at the time of an accident, chances are it will exert some amount of pressure on you.

However, about 7.9% of the ATV related accidents result in spinal injuries. This type of injury can occur due to two major factors. These factors include the riders’ levelness of the road and steering ability.

One thing remains certain when discussing ATV-related injuries. And this is the fact that all accidents caused by ATVs are not life-threatening.

It doesn’t mean you should take every precautionary measure for granted every time you are riding your four wheelers but it gives you some hope and encouragement to enjoy your ride.

That being said, leg injuries occur mainly during the accident and you may experience scrapes, broken bones and burns if you are not wearing long pants.

The most scaring incident that can occur when riding your ATV is the rollover. This is quite risky, especially when riding your four wheelers whether off-road or on a highway. Rollover accidents are a common occurrence where there are obstacles on the road or when you are trying to showcase your riding skills.

When a rollover accident takes place, the internal organs get injured and this is a sad reality. These injuries come about as a result of massive weight on the ATV crushing the riders if they accidentally get caught underneath.

But you can prevent such accidents by simply not speeding up immediately from the stopped point, taking care when riding downhill, not leaning back while going uphill, driving on even ground and not taking corners too fast. The bottom line is, you should never take unnecessary risks when riding your quad.

Fractures are common when driving heavy and large vehicles such as all-terrain vehicles. In most cases, you may not be able to prevent falls, crashes, and rollovers.

If any of these incidents take place, there are chances of your bones cracking or breaking under the heavy weight of your speedy ATV.

If a fall happens and does not break anything in your body, definitely it will result in a very painful bruising and sprain. But you can take care of that using ice and other relevant first aid procedures.

How to Make ATV Riding Safe?

Dirt Bike vs ATV-Which is Safer?

It may take you by surprise to learn that dirt bikes are safer than ATVs. This is the case especially for riders under the age of 16.

According to research conducted at Johns Hopkins University, ATV gets involved in less accidents but injuries are found to be more severe and frequent among the riders than what is seen in dirt bike riders.

ATVs are heavier thus more likely to roll over and cause severe injuries to a rider. This is unlike what happens on dirt bikes whereby the riders are thrown clear of their dirt bikes during the accident.

Statistics show that ATV crash victims were 50% more likely to be killed and 55% more likely to get admitted in the ICU in comparison to those injured in dirt bike accidents. In conclusion, dirt bikes are safer compared to quads (four wheelers).

The statistics on quads are appalling and quite discouraging for those looking to venture in ATV riding.

However, this can be short-changed only if safety measures are put into practice every time riders are out there doing what they love most.

Otherwise, ATV riding is quite fun and a great sport for those who love off-road rides.