Statistics show that there were about 41,000 ATVs bought in the US alone, between January and March 2017.

This merely confirms that more and more people are getting sold on owning all-terrain vehicles. And it’s all because of their usefulness. To start with, ATVs are edgy, compact, and they come with engines that can fire you up the highest of hills and race you through the deepest of trenches.

What’s more, four-wheelers can survive it all. Scratches, knocks, crashes, you mention it. Heck, ATVs can even roll over and still be okay to drive.

But one disadvantage of four-wheelers is that they are quite susceptible to backfiring. This is why you must understand everything there is to it. Otherwise, you won’t have an easy time owning an ATV. 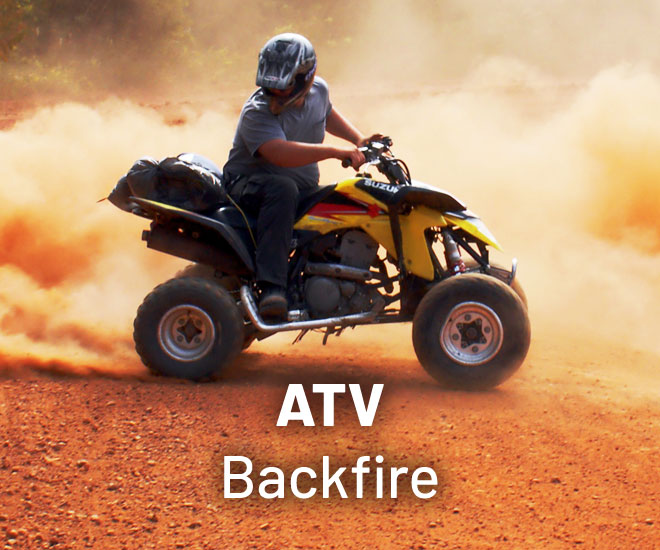 Why do ATVs Backfire?

Check out the following pointers:

What is a Backfire in ATVs?

Backfiring occurs when one (or more) spark plug in the ATV engine ignites the fuel when it’s out of turn in the chamber, and the exhaust valve on the cylinder is open.

In other words, ATV backfiring occurs due to a short, sudden instance when the engine is too lean or too rich. Meaning that the engine is receiving less fuel than it requires for the air taken in or more than enough. In fact, a backfire creates an explosion in the exhaust or intake of your engine.

This explosion is what causes the infamous nerve-wrecking sound many have heard when riding their ATVs. Mind you, explosions are normal occurrences in engines, but they ought to ignite in the combustion chamber only.

When the explosions happen elsewhere, there will be a ‘pop’ sound followed by a short interruption of the engine’s normal operations. Sometimes, backfiring can shut down the engine, forcing you to restart.

An ATV backfire is normally harmless, but if it’s happening frequently, there’s an underlying issue.

Now there several issues that can cause an ATV to backfire persistently:

When there’s a rich fuel/ air mixture, the engine’s combustion chamber doesn’t burn all the fuel provided, leaving traces of unburned fuel within the exhaust system.

This unused fuel gets burned when the exhaust valve opens again and after the spark plugs cross-ignite, causing an explosive effect that comes with a loud BOOM!

To put it differently, when the ATV engine receives an overly rich mixture of air and gas, the excess fuel in a cylinder doesn’t get burned in time for the exhausting process of the engine cycle. As soon as exhausting starts, the cylinder’s exhaust valve opens, which immediately igniting the unburned fuel because of the influx of extra air.

The result? A dramatic pop. And while many things can make your ATV engine run too rich, the most common cause is a clogged up air filter.

Yes, having an influx of fuel is often the result of air scarcity. Meaning that air flowing into your engine is getting chocked off somewhere. Many a time, it’s at the air filter.

So if your ATV keeps backfiring, first check the air filter. If it’s full of deposits and large sediments, replace it (for paper filters) or wash it (for foam filters). This should assist in balancing out the fuel/ air ratio.

Delayed engine timing or retarded timing occurs when the strokes of one of the engine’s cylinder head are not in sync with those of the intake-compression-power-exhaust.

Normally, the block and head should resonate concurrently so that the strokes occur at exactly the same time. If this doesn’t happen, the ignition begins late, igniting the fuel when the exhaust valve has opened.

It’s important to realize that the two issues mentioned above are the most commonly reported causes of ATV backfires. In other cases, the problem may emanate from:

Even the slightest of air leaks will dramatically increase the likelihood of an ATV engine popping.

Take note that most ATVs source fresh air at the junction of mufflers and header pipes. If there’s a leak along the system, the engine will keep backfiring.

In some instances, a popping exhaust system indicates that the engine has an extremely lean idle circuit.

In essence, the idle circuit controls the ratio of air to fuel the carburettor is using.

When the popping is irregular, extremely loud, and gets accompanied by a power loss, the ATV’s ignition might not be working properly.

This means that it’s firing at the wrong time, which is usually because of failing ignition coils, failing high tension leads, or spoilt connectors and switches.

When you don’t ride your ATV for a long time, the fuel inside its tank starts to degrade.

As soon as you get back on the road, the degraded fuel clogs up your carburettor. This leads to a reduction of fresh air intake into the engine, which affects the fuel/ air ratio in the combustion chamber.

This prevents the engine from guzzling up enough fuel in the combustion chambers.

Changes to the Exhaust or Muffler on the ATV

Any changes you make to your four-wheeler’s exhaust will ultimately affect how the exhaust and fuel system operates.

When are ATVs Likely to Backfire During a Ride?

Many riders usually experience a backfire when they suddenly let off the throttle.

This can be when coasting or even slowing down, and it’s probably because there isn’t enough fuel getting into the engine as it tries to idle. That makes the ATV run a little rich on air for that moment. In rare cases, a backfire pop when accelerating.

In as much as these two terms are synonymous, they technically different.

While backfiring comes with an explosion in the exhaust system, spitting leads to a reaction in the carburettor. What’s more, spitting usually occurs when the engine is cold, mostly early morning, and will cease as soon as the engine becomes warm.

Spitting actually begins when a spark is out of turn, which creates pressure from the burned fuel. Since this pressure needs to go somewhere, it leaves as soon as the valve opens for the next stroke. It then travels right through the intake manifold before leaving via the carburettor with the ‘spitting’ or ‘coughing effect.

Unless you’re blind or dead, you won’t miss hearing the popping effect of a backfiring ATV engine.

The pop is quite loud and usually precedes a flame that can emerge from the exhaust after the engine backfires.

What’s the Real Effect of an Engine Backfire?

The severity of a backfire normally depends on its strength.

If you hear only a mild cough-like sound, chance are there won’t be any damage to the ATV. On the other hand, a strong backfire can result in serious damages like cracks in the exhaust manifold. Worse, you may have to undertake costly and extensive repairs to get the engine working pop-free again.

All in all, a backfire will hardly cause injuries to the rider.

Here are some useful tips for preventing ATV engine backfire:

As mentioned earlier, cleaning your air filter will prevent a clog up and thus curb an overly rich fuel mixture.

When it comes to the frequency of cleaning, it all depends on how and where you use your ATV. If you’re mostly riding through muddy terrains, it’s advisable to change out or clean the filter more regularly.

Check Your Fuel Injectors and Plugs

Always ensure that your fuel injectors are in good shape.

They should be clean and functioning properly for the engine to constantly receive the right amount of fuel. You can also invest in an ignition tester to check how well your plugs are firing. These testers have circuits that measure the clicking on and off of a fuel injector’s solenoid.

Invest in a Fuel Injector Cleaner

A high-quality cleaner will help in getting rid of gunk and debris buildup in the injector lines.

This will go a long way in reducing the amount of dirt on the fuel filter.

Fill Up with A Higher Fuel Grade

As part of general maintenance, it’s vital to buy a cleaner fuel grade with reduced impurities or additives.

Using Google, find the throttle wheeler in ATV the model you’re using and adjust it to suit the engine.

The throttle wheeler is simply a component that decreases or increases the amount of fuel going into your engine when it’s idling. Find it and make small adjustments to see how the engine responds as you ride.

This involves removing as well as disassembling your carburetor.

With worthwhile instruction, you can DIY this job easily. Even so, it’s better to visit your mechanic for the procedure if you’re not too confident about your skills.

While an ATV backfire isn’t necessarily a grave situation, it’s best to look into the issue microscopically.

Remember, a backfire always indicates a fuel malfunction. Thus, you can prevent backfire by ensuring that your engine is constantly receiving the proper fuel/ air mixture.