Diesel motorcycles are rare in a market saturated by fuel-powered engines. Diesel engines are not without their advantages, however, as they offer impressive reliability while being indestructible, strong, and cheap to run. Despite these pros, diesel engines have never taken off in popularity. 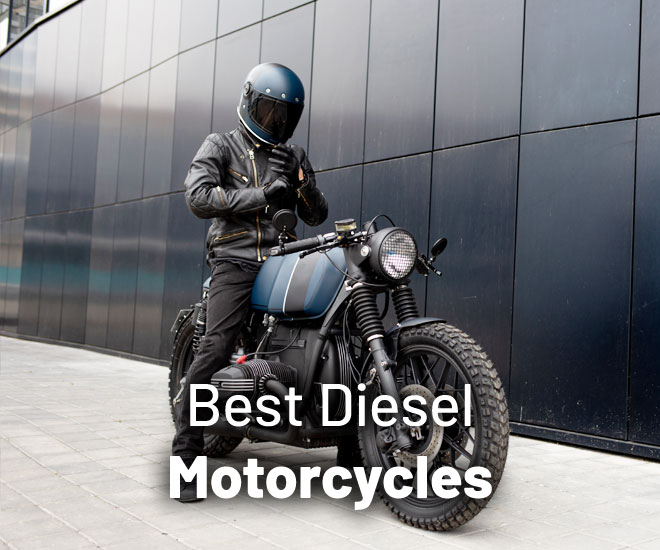 To manufacture a diesel engine that is light enough to provide a respectable power-to-weight ratio, specialized and expensive engineering is required.

Petrol-driven two wheels, therefore, continue to dominate the motorcycle segment. Despite their rarity, you can still get a few diesel motorcycles that have stood the test of time, including:

The Sommer 462 is named after Jochen Sommer, and it was initially designed for the German and European markets. The bike’s history goes back to the 90s when the Royal Enfield Company started importing diesel-powered models to little commercial success.

The Sommer Company, based in Germany, re-engineered the model in the 200s with a 462cc motor that could produce 2000rpm.

The modern Sommer 462 offers a respectable level of performance. It is fitted with a Bavarian Hatz single-cylinder motor that churns around 11 hp.

You can expect top speeds of 65 mph, which may not sound appealing, but is not so bad for a motorcycle that provides over 300 miles on a full tank. Its engine revs up to 4,000 rpm and consumes around two liters of fuel per 100 kilometers.

The motorcycle is a four-speed with a maintenance-free belt drive. It is contained in a Royal Enfield frame while other main components are also sourced from the Indian brand.

The bike’s compression runs around 20:1, and you should not be too eager on the kickstart in-between cruising. The Sommer 462 is hand-built in Germany, which means that its prices are not exactly cheap.

The Track T-800CDI can easily be confused for a modern bike thanks to its sleek design. It is a product of the Dutch manufacturer Evaproducts, and it bears a notable resemblance to the Yamaha Super Tenere.

The motorcycle is marketed to long-distance adventurers as it offers up to 140 miles per gallon. Its turbocharged 3-cylinder engine was picked from a SmartCar to provide 45 hp on tap and 78 lb-ft of torque. The top speeds of the Track T-800CDI is quoted at 110 mph.

While the motor is not very powerful, it will give riders a 0-60 mph time of four seconds. Additional features of the bike include long-travel suspension, Brembo brakes, upright ergonomics, Excel wheels, BMW-reminiscent shaft drive, and a trellis frame.

Do not blip the throttle at red lights, however, as you will engage drive and shoot forward.

The bike is very much a niche motorcycle, and only over 50 of them have been sold since production started in 2009.

With a marketed engine life of 250,000 miles, you will have to perform plenty of miles to make the bike pay. Production was halted in 2012, but you can buy the blueprints to make your own.

The Royal Enfield Bullet 350 ranks as the only mass-produced diesel motorcycle in the world. It was first introduced in 1931, and it is iconic for being the longest-running motorcycle in production since 1948.

The Bullet resembles an old-motorcycle, and current models come in more colors than the initial black paint scheme. You can get it in either Sapphire Blue, Bullet Silver, and Onyx Black.

The bike’s suspension is delivered by telescopic front forks as well as by the twin shock absorbers at the rear. A ride on the Bullet 350 is quite comfortable given its impressive specifications.

A 346cc Lombardini single-cylinder engine powers the bike. This four-stroke air-cooled motor produced less than 7 hp and gave out 160 miles per gallon. The top speed was about 50 mph.

The Hayes DT M1030 is probably the toughest bike on the list, given its military beginnings. It was designed from a Kawasaki KLR640 and built at Cranfield University in the UK.

The bike runs on a 670cc liquid-cooled motor, which can power distances of more than 400 miles before you need to refuel. It will, therefore, suit areas with inadequate refueling infrastructure. Riders can get a riding range of over 650km at a cruising speed of 90 km/h.

The single-cylinder four-stroke engine has been modified for better performance under the patented MAC-C1 technology. The motor can run on seven kinds of fuel as a result, including biodiesel, truck diesel, and five variants of jet fuel.

The level of engine power will depend on the fuel quality, but the motor is able to churn out 33hp and rev up to 7,000 rpm.

The HDT M1030 is built to be reliable in harsh conditions. It can cut through water that is two feet deep thanks to a fording depth of 610mm. Its heavy-duty frame is reinforced by a solid bash plate and military-grade wire-spoke alloy rims.

The bike is also designed to be stealthy, as witnessed in its non-reflective surfaces. Its blackout lighting means that it cannot be spotted at night, and you can also option an infrared driving light.

The HDT M1030 has never been put in mass production due to high military demand, but you can contact the manufacturer directly.

The Star Twin’s Thunder Star 1200 TDI has a sporty aesthetic set on a black and yellow color scheme. It is a product of Holland-based Star Twin, and it was introduced to the public in 2005.

The Thunder Star 1200 TDI was designed to be unlike any other diesel motorcycle before it. Its 1.2-liter engine was taken out of the Volkswagen Lupo to produce 100 hp. The three-cylinder turbo motor has even been modified to provide as much as 120 hp at 250 ft-lbs of torque and 5500rpm.

The bike does not disappoint when it comes to riding performance either. You get around 95 miles per gallon and top speeds of up to 70 mph.

The Thunder Star 1200 TDI was designed to offer more torque at almost rpm, and it accelerates hard in every gear. Star Twin wanted a diesel-powered motorbike that could compare favorably to gasoline versions in weight and performance, and they came up with the formidable Thunder Star 1200 TDI.

The Neander 1400 is manufactured in Germany by Neander AG, and it is among the best diesel motorcycles ever built.

The bike is powered by a colossal 1430cc oil/air-cooled parallel-twin turbocharged diesel motor. The engine is capable of producing 112 bhp at 4200 rpm, and this performance is even more impressive than that of an average car.

The bike has a dry weight of 270kg, half of which is taken up by the engine. You get maximum torque in any gear and any rpm almost immediately. The high torque makes it difficult to stall the motorcycle in any gear, but you can expect maximum speeds of 240 km/h.

The Neander 1400 is packed with features that support its super performance. It has 108 × 78.2 mm cylinders, and its cylinder head format is inspired by BMW.

Garett makes the Turbocharger while the 6-speed gearbox has similar gear ratios to the Aprilia RSV1000R. The bike’ boasts a compression of 16:1 and electronic direct fuel injection.

The bike is also quite economical, consuming about 4.4 liters of fuel for 100 kilometers. It is able to cruise with almost no vibrations while its noise is just like that of any big cruiser bike.

Overall, the Neander 1400 is a great performer on the road, but it is quite big with an equally hefty price tag.

Diesel engines have a reputation for being slower and more sluggish than petrol motorcycles. Diesel bikes also lag in performance on city streets.

This is not to say, however, that diesel engines are not capable of high performance, as we have seen in models like the Neander 1400 and HDT M1030. Diesel engines churn out more torque but a lower rpm than that of a petrol engine.

Specialized engineering is also required to get a good torque from a diesel-powered bike. Diesel engines need a lot of space to function since they consist of several large-ratio transmission gears.

The gearbox will end up being as large as the crankcase, and you will also have to part with a lot of money to get a high-performing diesel motorbike.

Do Diesel Motorbikes Use Less Fuel?

Diesel engines would, therefore, even out any fuel savings that a smaller petrol-fueled motor would afford. Diesel bikes have, however, been designed to offer a lot of miles per gallon.

Only a handful of diesel motorbikes have been manufactured, which is one of the reasons why these bikes are expensive.

The manufacturing costs are also prohibitive because of the feats of engineering required to make a diesel bike compare favorably to a petrol one.