Adrenaline and maneuvering through the dirt are things many people love. To enjoy both of these things fully, you need to have a dirt bike. The art of riding dirt bikes has been existent for so many years, and its momentum is not about to stop anytime soon. 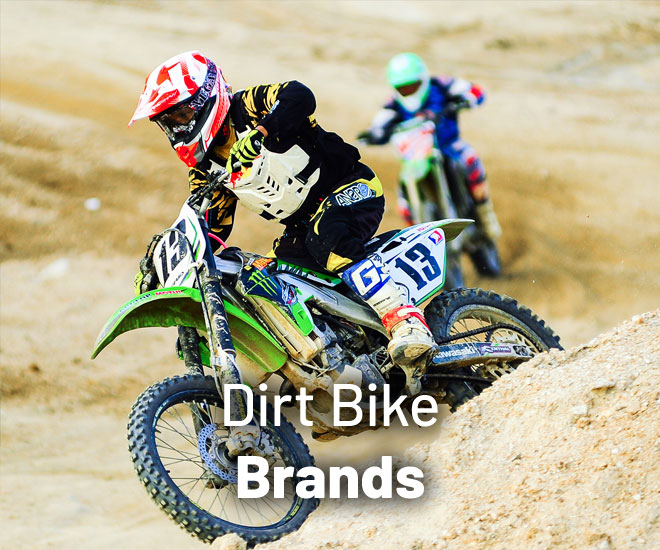 The growing love for riding dirt bikes is what led to the formation of numerous brands. Although there are many brands, there are few that actually stand out. Below are some of the top dirt bike brands you should know.

When you are talking about exceptional dirt bike brands, you cannot skip past Yamaha. Yamaha has one of the longest-serving reputations in the industry.

For this reason, it is recognized globally and has received numerous awards altogether.

A good example of a dirt bike by Yamaha that has made a name for itself in the industry is the Yamaha 250F. This five-valve, dirt bike initially came with a steel frame and aluminium sub-frames.

With time, Yamaha modified it and made it with an all-aluminium frame. This went a long way in improving its performance. That is why many dirt bike riders love it.

Suzuki is another leading dirt bike manufacturing company. It is known across the globe for its exceptional machines. The firm began making such bikes from as early as 1952.

However, Suzuki did not get much recognition until the 1970s. It was during this time that the company’s bikes won a lot of awards and competitions.

One of the competitions Suzuki has won is the GP competition. Its bikes are so good that they have won this competition for ten years straight. Some examples of Suzuki dirt bikes that are reputable in the industry are;

Anywhere people are talking about great dirt bike manufacturers, you must hear “Honda.”  Headquartered in Tokyo, Honda is a multinational company that makes various automobiles. One of the many automobiles it makes is dirt bikes.

Furthermore, the company has experts who have an exceptional set of skills. This helps them make reliable and top-notch dirt bikes. Here are some top dirt bikes from Honda;

This then gives consumers a chance to choose whatever option that suits them.

On top of making great machines, the company is also known for selling them at a low price. Most of the time, you will find that Kawasaki dirt bikes are among the cheapest in their classes.

This allows consumers to get access to quality machines without spending much.

When it comes to making dirt bikes with style and sleek designs, KTM carries the day. KTM is known globally mainly for the stylish and attractive dirt bikes they make.

The Austrian based firm entered the market less than 25 years ago and has truly made a mark.

The fact that they make appealing dirt bikes is just a small part of their amazing bikes. KTM is also known for its innovative technologies it uses in manufacturing. For this reason, their dirt bikes have attracted numerous fans in the dirt bike community.

One of the dirt bikes that has made a name for them is the KTM Sports Motorcycle. Ever since its production in 2004, this has been KTM’s best selling dirt bike.

Bultaco is a Spanish motorcycle manufacturing firm that was founded in 1958. In the beginning, the company specialized in manufacturing single-cylinder, two-stroke bikes.

While it was making these bikes, the company was experiencing huge success. This was cut short in 1983 when the firm was closed down.

The company, however, was revived 30 years later. Its main focus now was to develop electric off-road motorcycles. Currently, their new line up is built on their Brinco platform.

Manufacturing dirt bikes using this innovative platform is what sets them apart.

Beta is an Italian company that started out small in 1948. During this time, it was producing dirt bikes for domestic consumption. As time went by, demand for beta dirt bikes in other parts of the world grew.

The reason for this was because Beta made dirt bikes with unique designs and features. In the 1960s, Beta started exporting its dirt bikes, and it has never looked back ever since then.

Some classic dirt bikes made by Beta are the Enduro and Beta Alp 200. These bikes were made in the 1970s and 1980s. They have easily survived the test of time as they are still being used in motocross races today.

In the past, Husqvarna was known for making incredible lawn mowers and lawn mower parts. However, over the recent past, the firm decided to start manufacturing dirt bikes.

When it decided to put its foot into this market, it actually excelled.

Husqvarna dirt bikes are loved all over the world due to a wide range of reasons. One of these reasons is that they are lightweight.

This then makes them suitable for fast speeds, especially races/motocross. Dirt bikes made by Husqvarna are also stylish and cool looking.

Husqvarna dirt bikes also come with a very powerful and reliable engine. Also, we cannot forget the fact that the spare parts of the Husqvarna are quite inexpensive. This adds on to the long list of why it is loved in every part of the world.

Sherco is a major player in the motorcycle-manufacturing business. In essence, the firm has made many great dirt bikes that are being sold everywhere. Sherco came into existence after the demise of Bultaco in the 1980s.

The company name itself is a mix between “Bultaco” and Bultaco’s popular model, “Sherpa.” Although it is a result of this amalgamation in the 80s, it was not formally formed until 1998.

A year after its formation, Sherco started making dirt bikes. They made unique dirt bikes using a well-crafted chassis and engine. The firm also made bikes using the best available materials.

With this, they made waves and started getting recognition. One of its finest production is the 450 SEF FACTORY model.

Rieju is a Spanish firm that has come a long way since its inception in 1934. The company started by making a 40cc bike in 1947.

Since then, the company has continued to grow and now is a titan in the motorcycle making market. In essence, Rieju bikes are nowadays one of the best dirt bikes out there.

How to Choose the Best Dirt Bike Brand for You?

One of the most important things to look at before making a decision is your budget. Looking at your budget means looking at how much money you have. Once you have done this, determine how much you are willing to spend.

Once you have established your budget, you will have a narrowed down the list of the bikes you can buy. With this, the selection process becomes a little bit easier.

Reviews from other users can be of great help when you want to decide what bike brand you would like to buy. You will get an insight into the different bike brands without testing them.

Writing a list of pros and cons of certain dirt bike brands will smoothen the selection process. The reason is because you can weigh each of the brands objectively. With this, you then make a proper and informed decision.

Choose the Model You Want and then Compare

Once you have looked at everything else, you can now settle down and make a choice on the model you want.

Once you know the model you want, go through various dirt bikes brands and compare each one of them.

Of course, things like design and style are important. However, you should put more emphasis on the bike’s features and performance.

It is no secret that all major brands produce some spectacular dirt bikes. Hence it is unable to differentiate between brands when looking at similar models.

Even with that being said, it is important to know how the industry is moving.

This helps you when you would like to add another dirt bike to your collection. It also goes a long way in helping “newbies” get some insight into the world of dirt bikes.

With this, they will know what to look for and expect when trying to purchase their first dirt bikes.