The carburetor keeps your ATV or motorcycle running at the peak efficiency. A significantly dirty carburetor will seriously affect the performance of your bike to a point where it might stop functioning properly. When that happens, the first step you should take is to clean the carburetor. Carburetors are complicated components but they should not make you feel intimidated when it comes to the cleaning part.

By going through the right process systematically, there is no reason to avoid cleaning your bike’s carburetor. Before you take carburetor off & disassemble it, you will have to gather several tools. And because most of the parts in a carburetor are delicate, you will have to take several precautions. 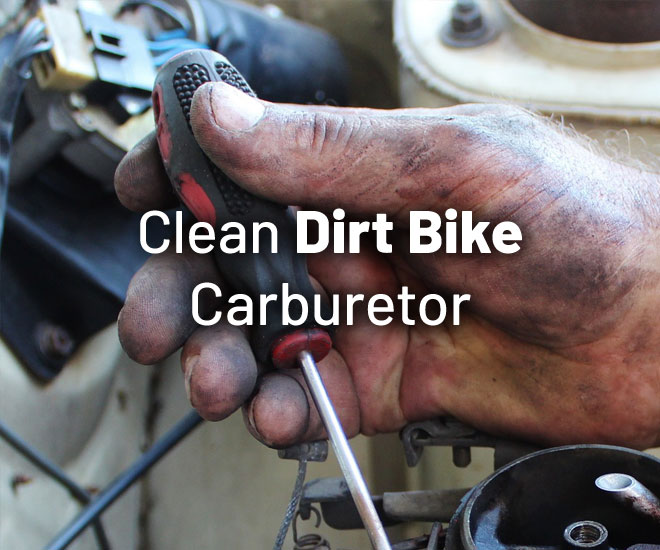 Tools You Need for Carburetor Cleaning

Safety is the very first thing you will have to consider when cleaning a carburetor. In addition to wearing safety glasses, you will have to use safety gloves throughout the process to protect yourself from chemicals in the gasoline, which can irritate your skin. After getting the two items, you will have to ensure that your working area is clean and properly lit. The cleanliness is important when undertaking any classic bike work, but it is more important when working on carburetors. Here are the tools you require when completing the cleaning:

The service manual is the most important tool. The market offers many kinds of bikes, which means that carburetors are not made the same way. The purpose of the service manual is to show you the main differences. Additionally, it will fully describe the size of the tools you need to do the cleaning.

And even though the compressed air is vital, it can be hard to access the industrial compressed air. If it is unavailable in your area, do not panic. You can purchase pressurized air cans at the retail locations. The tools you require are the basic ones. However, the screwdrivers have to be in their new condition because you will use them to remove the brass jets. If the driver does not locate them properly, it will damage them. The typical tool requirements include crosshead and straight blade screwdrivers, metric and standard socket sets, steel rule and carburetor cleaner.

Remove Carburetor From Your Dirt Bike

The part of your assembly will involve removing the float chamber. Turn your carburetor upside down to see the four screws that retain the float chamber – some units will feature three screws while others come with a wire clip. After you have removed the screws, you will need sharp tap with the plastic handle of your screwdriver to loosen the chamber from the gasket properly.

After removing the float chamber, you will see the main floats, jets, primary jet also known as pilot jet and the overflow pipe. The floats are delicate and you should, therefore, remove them first.

Manufacturers use plastic or brass to make the floats but the former material is prone to leaking and you should, therefore, inspect them to ensure that they do not contain any gasoline. Floats have to pivot freely on the pressed-in pin, generally fitted to the Keihin and Mikuni carburetors. You should be careful when removing the pins because the aluminum stand, which retains it, is more susceptible to breaking. When tapping, support it on one side.

Most carburetors come with a two-jet system. The first jet controls the flow of fuel from the idle to the one-third throttle openings while the second jet controls the flow to the other two thirds. Due to their small size, the Jets get restricted or blocked and that will cause an insufficient or lean running condition in the throttle opening period. Generally, the bike will need some amount of choke to negate or overcome the problem. The fix involves cleaning the jet thoroughly or replacing it.

The tapered screw has a significant effect on the mixture strength – lean or reaches – in the throttle opening’s first third and works along with main jet. Before removing it, you will have to check the position of the screw. Manufacturers set the screw at several turns from the fully closed position and you will have to put it back to that position during the reassembly.
Steps to clean the carburetor

First thing to clean is the float bowl. Use the rag and carb cleaner to clean it and then clean and inspect all the other parts of the carburetor. Flush out all holes in the body of carburetor with the carburetor cleaner and then blow through them with the compressed air. When doing that, use the goggles to protect your eyes because you will eject fluids and dirt particles from the holes.

To reassemble to the carburetor, you just need to reverse the disassembly process. However, before reattaching the float chamber, you will have to check the float heights. The height setting of the float is likely to affect the functioning of the engine and the mixture. You can adjust the height by bending the metal tang, which applies the pressure the engine’s needle valve slightly.

If you bend it too much, you will cut off the delivery of fuel into the chamber, therefore, minimizing the height of fuel. The workshop manual will provide you with the appropriate height, which the manufacturer measures with the carburetor inverted from the face of the gasket to the top part of the floats with a ruler.

Each time you overall your bike’s carburetor, you will have to fine-tune its air adjusting screw. After you have reattached carburetor properly and started the engine, allow the engine to warm up to its normal working temperature. Adjust the screw in quarter turn increments. If your engine speeds up, know that the adjustment is important. If it starts slowing down, reverse the adjustment.

How do you know if your carburetor needs cleaning?

A healthy heart is important for a healthy life and that is true for engines. The carburetor is the heart of your motorbike. Cholesterol in your heart can adversely affect your health. On the other hand, gummy fuel residue and dirt in the carburetor will bog it down. That can hinder the performance of the engine and engine will finally fail. To maintain efficient operations, you will have to keep the carburetor clean. Here are some of the signs that will tell you it is time to clean the carburetor.

The carburetor might not be to blame for some of the issues, but mostly it is usually the culprit. With the signs, you will always know when it is time to do the cleaning.

Is it hard to clean carburetor? It will highly depend on the bike but generally, it is not hard if you are mechanically inclined and you have a manual. A shop will charge you a lot of money, so cleaning it the DIY is a good decision.