There is a general risk of injury when motorcycles are driven along rough terrain. Most enthusiasts of off-road driving are lured in by the dare-devil aspect of the activity. Dirt bike injuries affect both children and adults.

The American Academy of Pediatrics advised parents not to allow children under 16 years to take part in the sport in 2000 because it needs judgment and skills that children do not have yet. Some states have set minimum ages while some require safety equipment and adult supervision for children. 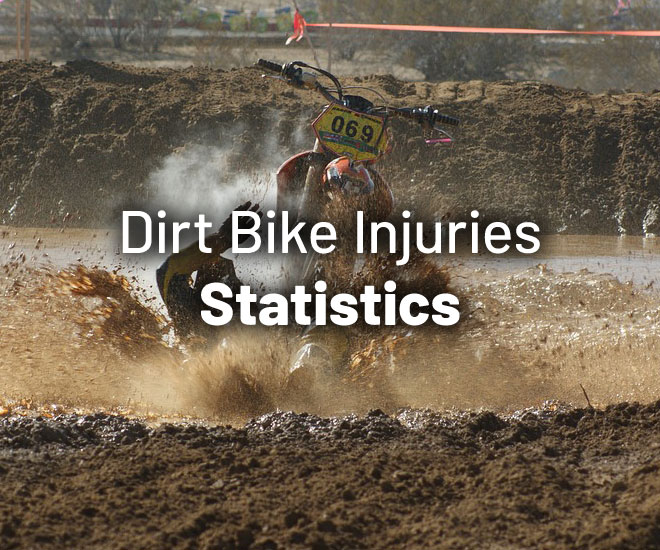 Over half of all dirt bike injuries that necessitate hospitalization occur during official races, although only a small percentage of motorcycles are used for racing.

Supercross and Motocross are more likely to result in injury than trail riding. Other interesting statistics include:

The Center for Disease Control released dirt bike injuries statistics for the 2001-2004 period which summarized the following:

Common causes of dirt riding injury include uneven terrain, falls during jumps, and collisions with other riders. The most common areas for trauma are the arm, neck or head. Abrasions are diagnosed in many cases as well as fractures and sprains. Some of these injuries include:

Dirt Bike vs ATV – Which is Safer to Ride?

There is a lot of debate among the off-road riding community about whether ATVs rides are safer than dirt bikes. There is a notable trend among dirt riding hobbyists to opt for ATVs instead of dirt bikes. ATVs, when compared to dirt bikes, seem more stable and sturdier and less likely to crash.

Victims of ATV-linked crashes were also recorded to be 55% more likely to be admitted to an ICU and 42% to be placed on a ventilator than injured motorcyclists. In 2000, there were 92,200 ATV injuries compared to the 150,900 ATV injuries in 2007. This research contradicts the common belief that ATVs are safer than off-road bikes.

The researchers could not conclusively identify the reasons for the ATV fatalities. Helmet use is not a solid ground to explain the difference between ATV and dirt bikes fatalities although 60% of motorcyclists in the study were wearing helmets compared to the 30% of the ATV riders. Even if both of the dirt bike and ATV riders were wearing helmets, ATV riders still emerged with more severe injuries and fatal outcomes.

The research team agrees that it is possible than riders on ATVs use less protective equipment than dirt bikers, and can sometimes even ride with just a t-shirt and shorts. Only countable states require the use of a helmet on an ATV although almost all of them have instituted laws requiring motorcycles for motorcycles. ATV riders are often sold on the safety illusion of driving an ATV.

The extra stability of installing four wheels on an ATV means that a rider does not need to balance as much as they would on a two-wheel motorcycle. In theory, the ATV should be more stable and therefore safer. The ATV design is particularly what makes it very dangerous as it lacks crash protection for the rider and lateral stability.

ATVs roll over quite easily. Manufacturers have added many features that are fueling the popularity of ATVs including powerful steering. They have not, however, been able to eliminate the risk of overturns meaning even riders who follow safety guidelines and observe traffic lights are as prone to injury as reckless riders.

Most ATVs weigh between 650 to 850 pounds which is another problem with their design. The weight is already fatal, without adding the force and the momentum involved in an ATV crash. If you drop an off-road bike, the common injuries you’ll sustain is spraining your wrist or leg. You, however, run the risk of breaking your back or neck if you roll an ATV. ATV injuries are often crash injuries which is why they are deadlier than trauma from a dirt bike.

An ATV is more likely to run on top of the rider while a bike rider tends to get thrown off the bike. Dirt bikes commonly weigh about 200 pounds and will not cause as much damage as an ATV hitting a rider.

ATVs are especially dangerous for hobbyists under 16 years of age. Statistics reflect that dirt bikes are safer for kids than ATVs because parents often put kids on ATVs that are the ill fight for their age and size. It is cheaper to buy a full-size ATV so that a kid does not keep outgrowing their vehicles, but this may prove fatal in the long run.

How to Make Dirt Biking Safe?

Riding a dirt bike is not easy as YouTube videos make it seem and it can take years to master. Losing control and falling off the bike is common as you begin the venture. You will have to master throttle and clutch control, balance, and body positioning.

As much as dirt biking is a physical sport, it is also a mental one as you will have to rely on your memory to maneuver through trails. The question remains how to make dirt biking safe. Top things to keep mind include:

Dirt bikers are often seen in jerseys representing their favored brands. The jersey should be breathable and keep you cool on those hot days. The stretchable and light fabric is also ideal when winding along wooded regions as it protects your arms from scuffs and scrapes. You also want a pair of breathable and durable pants instead of thin and loose-fitting options. The former type of pants offers abrasion resistance. Off-road boots have important features like a durable outsole, reasonable ankle movement, a protective shin plate, lightweight frame, and breathable design.

Gloves will protect against burns and abrasions and also prevent the formation of blisters. They further encourage hand endurance by offering padding to lessen vibration. Baggy gloves should be avoided as they can get caught on the bike levers or slip. The best gloves have some sort on the level fingers or palms to guard against slippage.

A full-face helmet offers the most protection for a rider’s brain. The jaw protector ensures that you do not break your jaw or get your teeth knocked out. It should at the very least be DOT-approved. A good helmet offers excellent ventilation to reduce the risk of overheating. The more a rider can view, the better they will ride which is why a helmet should have a wide vision area. The shell should also be lightweight. Quality goggles will protect your eyes from debris, mud, and rain.

Goggles offer different features from the light-sensitive selections, to those that offer good depth perception. Most companies provide their dirt goggles with wide lenses to boost vision and also let users also use their peripheral vision. Comfort is of utmost importance as is ventilation and sweat absorption.

Knee braces are needed to protect the knees, which are one of the most vulnerable body parts during off-road riding. The best options offer adjustments so that you can find the most comfortable configuration. The material should be strong and lightweight like the braces made of carbon fiber.

A neck brace offers protection for a rider’s spinal cord. Other protective gear that is good to have include elbow guards and body armor.

Taking a hands-on riding course will not only make you a better ride, but you will have better judgment to avoid crashes and accidents. Ride with buddies on trails instead of alone. Dirt bikes should not be regarded as toys and there is imperative to supervise children.

Youngsters should not be left on bikes that are bigger than their size allowance. It is safer to ride on designated trails and avoid public roads. Like with everything vehicle, it is discouraged to handle a dirt bike under the influence of alcohol.

Any adventure that is as exhilarating as dirt bike riding has its risks. If done right, however, bike riding can be enjoyable and exciting. A common query among outdoor enthusiasts is the safety of dirt bikes in comparison to ATVs. It is commonly believed that ATVs are safer because of their perceived stability.

Statistics reflect that it is much dangerous to be on ATV than a dirt bike. Riders should pack on such protective gear as helmets, gloves, knee pads, and goggles to protect themselves on off-road pursuits.