VIN is also called a VIN code, VIN number, or body number. VIN function’s like a vehicle’s fingerprint. The code will reveal a vehicle’s model, features, technical specifications, manufacturer, model, and place and year of manufacture. VIN denotes Vehicle Identification Number, and it is used by all manufacturers of vehicles. 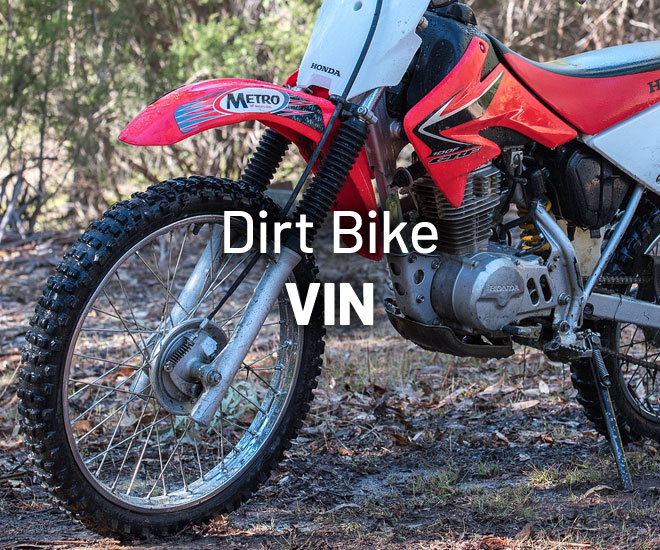 Historically, different companies used their own VINs as there was no universal standard used in the market. It was not until 1981 when it was standardized by the US National Highways Traffic Safety Administration. It is legally necessitated for vehicles to have a 17-long VIN and it is impossible to find two vehicles with the same code.

The number is not something worth memorizing, although it helps to know exactly where on your bike it is situated. It appears on insurance cards, titles, and even registration.

A VIN becomes especially important when you are buying parts for your bike, and even sales rep ask for it. It is helpful to be aware of where your bike’s papers are at all times. The VIN is etched as a long stretch of characters although they are sectioned in three groups.

Outlined below are the details pertaining your dirt bike’s VIN: 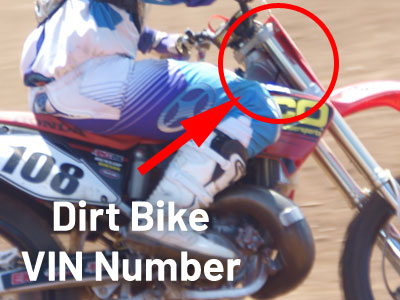 The first three characters are known as the World Manufacturer Identifier (WMI). The first symbol illustrates where the motorcycle was built or the region where the headquarters of the manufacturer is located.

The 2nd character reflects information on the manufacturer. A Honda bike will for example be represented with a “H”. The third symbol indicates the type of the vehicle.

The 4th to the 8th symbols indicates the type, brand, style options, and engine size. This character group is known as the Vehicle Descriptor Section and it contains the attributes of a specific dirt bike.

Every manufacture has implemented their own unique systems for VDS because of local regulations and additional factors. For off-roaders, the starting digit will be an “S” while bikes classified in the single-cylinder sport-street group will begin with an “N”.

The next two characters stand for the model version the model variation.

The seventh digit can be a “1” to indicate that it’s the first version of the bike in question. The ninth symbol is a check number calculated via an algorithm of all the other digits in the VIN. Manufacturers used the ninth symbol to check for vehicle identification fraud.

The 10th symbol will tell you the manufacture year. Vehicles sold before 2001 have a letter as the 10th digit. Those manufactured afterward use numbers. A bike made in 2003 will for example have 3 as its tenth digit.

The model year is distinct from the production year. If the bike was for example manufactured in November 2018 but gets to the showroom in March 2019, it will be given a 2019 date.

The 11th character narrows down the specific plant from where the bike was made.

The Importance of a VIN

A VIN is the most important set of numbers in identifying a vehicle. A bike’s “life events” are typically held in the code, including production, registration, accidents, inspection, insurance coverage, recalls, purchase, and warranty claims. These occurrences are stored in various databases and registries using the VIN.

By simply running the VIN, you will retrieve not only the bike’s general facts but its specific details as well like how many owners have had it. For consumers, it is vital to know if a dirt bike has been stolen or has been in an accident as it helps to influence the decision to buy.

Location of a VIN

The VIN location on motorcycles and dirt bikes is typically on the steering neck. Some are marked on the motor close to the bottom of the cylinders. To find it, turn your bike’s handlebars to the left to look on the right side at the point where the steering head pushes through the frame.

The number will be vertically etched on the metal. Finding a VIN number on other off-roaders like ATVs is more complex as it depends on the manufacturing company.

The VIN will also be included in a bike’s paperwork like registration papers, title, and proof of insurance.

An engine number is different from the VIN. It has 11 digits and is etched on the right part of the engine case close to the Kickstarter.

The engine number differs from the 17 VIN code, and it should not be included on the Bill of Sale. Only the VIN should be used for legal procedures.

This document is available regardless of whether the owner registered the dirt bike or not. The paperwork is provided by the dealer and has the model’s VIN. If the seller is not the original owner and the paperwork is not available, proceed with caution as the bike might be stolen.

You can run the provided VIN through some databases to establish whether the bike has been stolen or not. No action is foolproof when it comes to checking for stolen bikes.

Even if a bike has been stolen, it may take a while for it to be added to a database and you might end up buying it because it is not acknowledged as a stolen vehicle. The police typically take some days before including a stolen bike’s VIN into the registry.

If it had insurance, the insurance company commonly takes some time to update the police. Most websites were also launched first to highlight stolen cars, but they will typically have information for bikes’ VINs.

Some platforms you can check for stolen bikes include:

Most people think of the VIN when they intend to purchase a used dirt bike. Commercial services charge a fee for you to run a bike’s VIN.

The records will show how many owners a specific bike has had. It can help you double-check the information provided by the seller. The records will further notify you if the bike has been involved in a crash.

VINs help detect dirt bike theft since it is difficult to resell stolen bikes. Thieves can, however, alter VINS, so you need to be extra-vigilant.

Should I give out by my VIN?

Dirt bikes forums are not free of unfounded opinions. You may have heard that it is not a good idea to share your VIN information. A VIN number is, however, not equivalent to your social security number.

It depends on the recipient and the intention for the information swap. A potential buyer will need your VIN when you decide to sell your dirt bike.

This is because of the important details included in the code and which could influence their decision when choosing to purchase the bike. It is therefore not dangerous to give out your VIN to potential customers.

If you are selling the bike to a dealer, they will typically ask for the VIN. The code basically indicates all the vital details a dealer will want to know to sell the bike. The VIN does not reveal any personal information about you.

What if the VIN Does not Have 17 Characters?

Dirt bikes with VINs short of 17 symbols were probably produced before 1981 and will therefore not decode. Some data providers may have the bike’s history information. The information might be limited, so you are better off with a more recent model.

The current 17-digit long VIN has been used since 1981 for all vehicles, including dirt bikes. It has been coded to reflect all the vital importation of a bike. A VIN will reflect a bike’s model, manufacturer, country of origin, assembly part, model year, type, engine size, and production number.

VINs are commonly used in buying a used dirt bike. A buyer can see all accidents and inspections of a particular dirt bike. It is not easy to decode a VIN by yourself, and you will need to run it through some databases to get all the information.

VINs are typically used in stolen bike databases where you can check if the bike you intend to buy is a result of theft. A VIN code will also come in handy when you want to verify the information a seller has given you.

It would be unfortunate to lose your money in a stolen bike. After you inspect the vehicle to ascertain its mechanic condition, ask for the VIN from the seller or check it on the bike’s body. This method is not foolproof, however, as the code can be altered by thieves.