Street and dirt bikes are both two-wheeled motorcycles. Some of their differences are physically noticeable while others are more prominent in construction and material. Enthusiasts of motorcycles love the adrenaline rush and the fresh air experience of riding one. 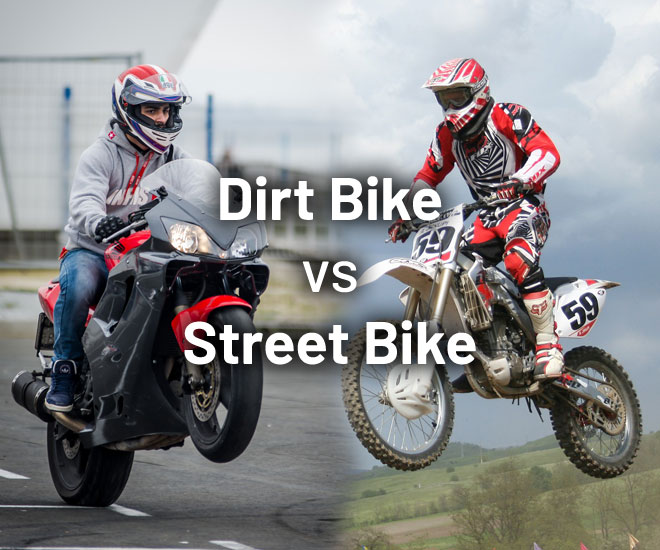 Engineers have dedicated years to perfect the different types of these vehicles so that riders can experience excellent performance. Street and dirt bikes can further be broken down into subgroups.

The inherent difference between the two is that street bikes are suitable for roads and dirt roads for dirt bikes. Additional differences are discussed below:

Size is among the most discernible distinctions between the two motorcycles. Dirt bikes are smaller, and they are typically designed with the bare minimum so that the rider will find it easy to control it.

Riding along a dirt road is quite challenging. Sometimes a rider will even have to work around certain hurdles forcibly. Dirt bikes have a single cylinder and a smaller displacement and are better suited to handle uneven paths that street bikes.

Street bikes share the road with larger and heavier cars. The drag from the passing cars vehicles can be hard to overcome which is why a sturdier machine is needed to keep the rider grounded.

The tires fitted on a bike will speak to the terrain it is designed for. Off-road tires are fashioned to amplify tractions on surfaces like gravel and dirt. The tires are mostly knobby with big blocks and large empty regions to power the bike to claw in dirt, mud, and sand.

The tires are also narrower with a more flexible carcass. You can feel this knobby nature in the bike when you corner on the street and feel the tires squirm.

Street tires are designed with a rounded and smooth shape, and they do not have much space in them. Engineers ensure that they expose maximum rubber on the road to encourage more grip with the surface.

The tread pattern directs water away from a street bike tire but has no function in mud, sand, or snow. Dual sport tires commonly feature ratio percentages to reflect how biased they are for off-road or on-road use.

Suspension deals with the absorption of shock. The more shock a bike will need to absorb, the looser its suspension. Dirt bikes need to ride over numerous obstacles and are therefore manufactured with a system of spring shocks and hydraulic tubes to absorb a lot of impact.

The suspension travel in these bikes is commonly twelve inches or more.

Too much suspension can make a ride uncomfortable on the road, and it is even possible for a rider to bottom out as they ride along the road.

Road bikes are capable of absorbing minor shocks and imperfections while still making the ride comfortable. Suspension travel is commonly a few inches so that the bike can ride through simple obstacles like potholes.

You may not notice the different seating positions needed to ride the bikes. If you observe dirt biking competitions, the riders can often be seen standing up when maneuvering across hurdles.

The seats tend to lean forward so that a rider can adjust fast and efficiently. You sit upright on an off-road bike and place your feet directly below you because you will be standing up constantly.

Adventure bikes have the same design, and part of the reason why they are popular is that the seating position is easy on your wrists and back. Sport bikes move a rider forward into the wind and position your feet upward and rearward to encourage bigger lean inclinations in the corners.

While this position is perfect for off-road pursuits, it can be uncomfortable for long periods without the wind thrusting against your chest. The handlebars in a dirt bike are placed lower on the body for maximum visibility and control.

The seats on street bikes are positioned further back to enable the rider to relax. It places a minimal strain on a rider’s joints, and the spine is also placed at a natural position. Riders often have to stop in traffic lights, and the comfortable position means that they can travel for a long time.

The force of braking makes the front suspension compress to bring the ride to a halt. The power of the bikes is directly correlated with the speed and weight of motorcycles. In the case of street bikes, they typically move at higher speeds and are heavier.

The bikes, therefore, need a more powerful braking system. Street bikes also enjoy more traction from their tires meaning they can channel a higher amount of braking force to the pavement. When a street bike is taken to an off-road, the brakes will quickly lock up the tires since it is on a low traction-surface.

Dirt bikes are generally fitted with smaller brake rotors, and some of them may only contain a single disc up front. Bikes typically rely on the front ability to fuel the bulk of the braking ability, but you may utilize the rear brake more on a dirt road.

It is common knowledge that the bigger the tank the more fuel it can hold. Huge fuel tanks are necessary for long journeys. Dirt bikes generally do not venture far and have small fuel tanks.

A big tank would only add unnecessary weight while ideally, a dirt bike should weigh as little as possible. Road bikes are more suited for long-distance traveling and therefore have larger tanks.

Traveling bikes are especially ideal for long distances. Scooters, however, are the odd category in street bikes as they travel for short lengths.

As mentioned, dirt bikes are smaller than their on-road counterparts, thanks to a lighter and smaller frame. They are commonly made of hard plastics to make them flexible and easy to control.

Street bikes are geared to move effortlessly at freeway speeds and can even hit triple digits if designed with a generous throttle application. Street bike riders do not generally need to slip the clutch.

You will most likely disengage the clutch for a fraction of a second when you up-shift and maybe use it along with blipping the throttle to downshift.

Dirt riding commonly calls for low-speed maneuvering and rather than move through the gears and control the speed via the throttle, it is much easier to maintain the throttle constant and employ the clutch to control drive to the wheels.

When riding a street bike, you do not need to apply a lot of steering to control the bike. With sport bikes, you cannot even play around with bars for very far before making contact with the tanks.

Large steering inputs only come in handy when maneuvering through traffic or at parking lot speeds. Leaning on the direction you want is often enough to turn a road bike making it quite easy to take corners.

You will also need to lean on dirt bikes, but you will probably be negotiating ruts and working with the bars for most of the journey. Dirt bikes are fitted with wide bars to achieve more leverage and for the capability to turn the tire much further from one side to another.

Dirt bikers are commonly seen applying the use of the handlebars and putting their feet down to stabilize the bike’s balance.

Road bikes are generally geared to move effortlessly at freeway speeds and can easily reach triple digits with a powerful throttle application. Even the street legal dirt bikes are designed for optimal torque application in lower gears to leap to the top part of steep hills and pull out of mud and sand.

The final gearing is commonly the real change that distinguishes a street legal bike from an off-road one since the manufacturers assume that you desire highway cruising abilities.

Riding a motorcycle on the dirt and road are quite different adventures. The same laws of physics apply in the construction of street and dirt bikes, but they are optimized differently to fit the terrains they are used on.

Even basic functions like braking, clutch engagement, use of throttle, acceleration, and leaning into corners are designed differently.

Dirt bikes are typically taller with flatter handlebars. They have a higher ground clearance because it is especially important for a rider to view their surroundings clearly.

The tires are fashioned to dig into the surface and kick everything back and not stick to it.

Riders often stand on the bike thanks to seats that lean forward. Street bikes, on the other hand, are heavier for stability and sturdiness. Street bikes interact with bigger vehicles on roads and have to be more grounded.

They are made of metal to offer additional stability and style. The market also has specialized bikes for things like exploring and commuting.