More often than not you may hear the deafening and thunderous roar of dirt bikes on the highway or near your resident and wonder why they are always so loud. Perhaps this is one of the questions you have been asking yourself and failing to find an appropriate answer. 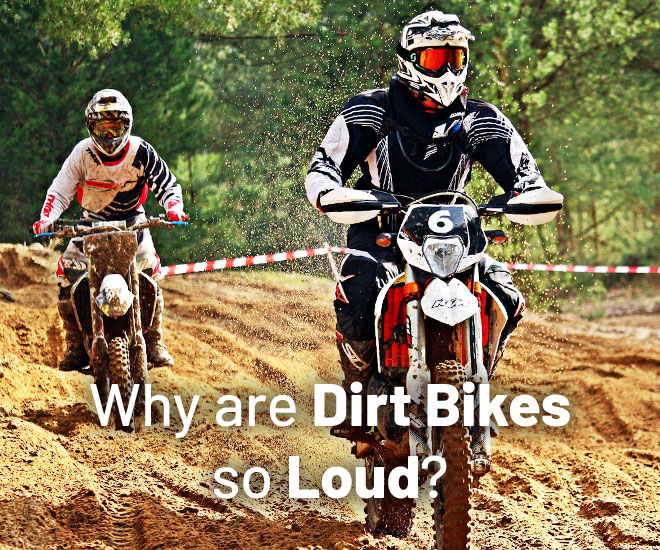 Why are Dirt Bikes so Loud?

What if it is your own dirt bike that has been making such an unpleasant noise? How loud do you think it is? Where do you think that noise comes from? And how can you reduce it?

This article will help you in answering these questions in a more appropriate way so you may know how to handle this problem.

How Loud is Actually a Dirt Bike?

According to one study carried in the state of California, the sound produced by a dirt bike should not exceed 96 decibels.

This value denotes a sound that is more or less the same as a quiet roar and it is the most comfortable sound that is recommended for every dirt bike. Anyway, every state has its own laws in relation to the use of dirt bikes.

Even though the decibel of each dirt bike varies from time to time, the noise created depends solely on how the bike was made and the speed with which you are riding your dirt bike.

These two factors can affect the performance of your dirt bike as well as its noise levels.

Where does the Noise Come From?

Perhaps your dirt bike is producing a lot of noise because of its high revolutions per minute (RPMs), its short mufflers and how frequent it accelerates rather than cruising.

Besides mufflers and RPMs, there are other factors that influence the production of loud noise in dirt bikes. But it is not easy to point out which one of these factors is the main cause of loud noise in bikes.

The bottom line is that all of them contribute to the production of noise in one way or the other. Below are the most common factors that cause loudness in dirt bikes:

The sound your dirt bike makes depends mainly on how faster or slower your bike moves. For instance, a 2-stroke dirt bike will create noise depending on how its adjustable power valves work. This means when valves open at different rpms, the bike will create erratic noise levels.

On the other hand, the 4-stroke dirt bike will experience a similar variation of the noise levels, but this time the difference will be created by the carburetor settings. In other words, the noise will be influenced by the length and width of the carburetor.

Mufflers and pipes are responsible for the creation of very loud noise in dirt bikes. The noise can get higher depending on the type of mufflers in your dirt bike.

Examples of the mufflers include the chambered muffler, turbo style muffler and straight through muffler.

With the chambered mufflers, the grooves inside cause some friction which in turn lowers the noise. The straight through muffler is actually the standard piping and it absorbs some noise thus lowering the sound produced.

And finally, the turbo style muffler is shaped to look like an “S” in order to take most of the sound in while releasing out the rest.

When it comes to the pipes within your dirt bike, the situation changes to something else. This is because the pipes come in different lengths, causing quicker bursts of energy to come out of the bike.

It is not always true to say that different parts on the bike cause higher or lower sound. As a matter of fact, an old or already used bike can produce more noise just like other parts on your dirt bike.

As your bike becomes old, some parts start wearing down, leading to the creation of undesirable noises while riding. Therefore, make sure that you check and replace the old and worn out parts on your dirt bike to minimize such loud noises.

2-Stroke Versus 4-Stroke-Which is Louder?

The 2-stroke and 4-stroke dirt bikes differ greatly in the manner with which their respective pistons move in their engines. Actually, the strokes refer to the number of times pistons move back and forth in the engine, leading to chain reactions in the engine itself.

So, how does the sound come about? The sound is created as a result of the number of times the pistons in the engine pushes out the exhaust.

When it comes to the 4-stroke dirt bike, the engine follows a certain series which is injection-compression-ignition-exhaust, thus the term, “four-stroke”. This happens in a very simple way; each time the piston pushes down a second time it causes the release of the exhaust.

The exhaust, however, does not create a lot of commotion in the dirt bike as it is the case with the 2-stroke dirt bike.

For the 2-stroke engine dirt bikes, every time the pistons pull back, the combustion takes place, causing the engine to produce relatively louder noise compared to that for the 4-stroke dirt bikes.

How do You Reduce Noise on Your Dirt Bike?

It doesn’t matter whether your dirt bike is brand new or used provided that is working properly while maintaining low levels of noise.

If not, you should find the best ways to decrease its loudness in order to stop upsetting those close to you while enjoying your ride. Normally, the bikes get louder as they age or when used from time to time.

This is the moment you will realize that some parts are wearing out or getting loose, thus causing more noise or loudness that is unbearable not only to you but to everyone around you.

To overcome your dirt bike’s loudness, you need to take drastic measures in time before it’s too late. First of all, check your bike’s muffler and try to find out if it is the source of that unpleasant loudness.

In most cases, shorter mufflers are responsible for creating loud noise in bikes and you can change all that by fixing the problem to allow it to absorb most of the noise produced from the engine.

Secondly, check all the parts on your dirt bike to find out which one needs repair or replacement. Look around to see if the tubing is air-tight and fix it just in case.

Go ahead and inspect every nut and bolt on your bike to ensure that they are securely placed and nothing is making some noise during the rides.

Make sure that the overall performance of your dirt bike is optimal by fixing everything that might be causing the loudness. Most importantly, ensure that your dirt is functioning well and according to the laws laid down in your city or state.

Electric dirt bikes are extremely quiet although they are known to produce very minimal noise that is generated from the humming of their motors.

These motors are run on electric power produced from the batteries attached to the bikes as opposed to gas dirt bikes.

To answer the question posed above, it is correct to say that electric dirt bikes produce some noise but the noise produced is too low to create any meaningful impact.

That explains why they are the best choice when riding in residential areas.

Dirt bikes make loud noises for a number of reasons including when they are accelerating, according to engine capacity, the type of mufflers, length of pipes, wear and tear and the number of times pistons in the engine move.

The level of noise produced by these bikes will also be determined by their respective models, the make, formatting of the bikes and how fast or slow they are being driven.

The good news is that you can limit the noise produced by your bike by simply checking and replacing worn out parts as well as doing a few modifications on key parts associated with the production of noise.