Your new dirt bike stands shiny in your garage, and it is time to ask yourself the all-important question: do you need insurance for it? A dirt bike is a motorcycle by all accounts, and all motorcycles require insurance. 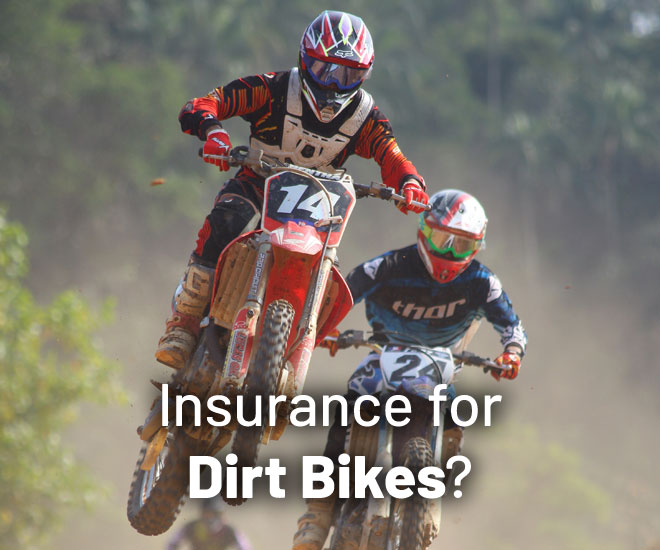 Dirt bikes are however ridden on off-road terrains. Off-road dirt bikes are not even street legal. Accidents happen either way, and your car insurance or homeowners policies will not cover your bike or yourself unless specified.

Dirt bikes are generally classified as off-highway vehicles (OHVs). They are typically not allowed on the road unless you modify it to be road-worthy by adding features like tail lights.

Off-roading riding presents its kind of challenges, which is why dirt bikes cannot be effectively covered by motorcycle insurance.

When it comes to dirt bike insurance, it depends on your state. States like New Jersey need dirt bikes to be registered in addition to at least having property damage liability and bodily injury insurance.

In North Carolina, a dirt bike is regarded as a utility vehicle and does not need to be registered. In states that do not demand insurance or registration for dirt bikes, riders may need to give up proof of insurance to access some areas like state-operated parks.

If you have a dirt bike fashioned for both highway and off-road riding, the vehicle will be recognized as a motorcycle and will have to be registered and insurance under the compulsory liability insurance coverage.

A dirt bike is among the types of motorcycles. Dirt bikes feature an engine and two wheels making them motorcycles by definition. Dirt bikes are however distinctly lightweight, and their design is optimized for off-road terrains.

Dirt bikes pose a great deal of hazards if used on roads and highways and most states have instituted prohibition laws for the vehicles. Because of their nature, dirt bikes cannot be appropriately covered by standard insurance coverages. The policies need to cover the off-road experience.

If you are riding on trails, an accident will mostly involve you, the bike, and the ground. But every now and then, a bystander, another rider, or someone’s property gets involved. First time riders are especially at risk of running into close-by cars, trucks, and other bikes.

If it is subsequently determined that you are at fault, you will have to pay up. Car owners take liability insurance all the time to ensure that they compensate for any third-party harm. Liability insurance for dirt bikes works similarly.

The threat of dirt bike theft should not be overlooked. Authorities also have a challenging time in tracking unregistered motorcycles. Dirt bikes do not come cheap.

The cost skyrockets if you add some quality and pricey parts or modify your vehicle to your taste. Your prized bike needs adequate protection, not only from thieves but from crashes and accidents as well.

Off-roading riding is not the safest sport there. As much as dirt bikes are fun, they are also dangerous, mainly because of the nature of off-road trails. Pro-riders have accumulated plenty of injuries, and bikes along the way. Amateur riders are particularly vulnerable to getting into accidents.

Consider the potential costs of damage to property, medical bills, or damage to the bike. This financial risk is best mitigated by a policy.

Dirt bikes are not included in a homeowner’s insurance as it is sometimes wrongly assumed and you will therefore not be compensated if yours is damaged or stolen from your home or garage.

What Dirt Bike Insurance Do You Need?

Bike insurance resembles auto insurance but at lower limits. The kind of insurance that you get will be guided by the uses you intend for your bike.

If you are more enthusiastic about trail-riding, you will need different coverage than an avid track racer.

The policies to consider include:

These coverages are accommodated in every dirt bike insurance policy. Bodily injury will settle the medical responsibilities of the other party involved in a crash up to the specified limit. It is included as part of Liability coverage, like an auto policy.

Property damage is also part of Liability coverage. It will meet the financial costs for the damage to the third party’s property.

Dirt bikes present the fun sport that is dirt biking. Other people may want to ride your motorcycle, whether they have sought your permission or not. A liability coverage cushions you from any financial claims that may arise in the case of an incident.

The idea that a dirt bike can damage other people’s property is not too far-fetched as you can ride on a private road and damage a lawn or crops.

This policy is optional and mitigates the financial risk for the medical bills that may accrue if you or an extra passenger are involved in a crash. It applies to any accident, regardless of the party at fault.

It can supplement a rider’s health insurance if they reach the limit. The policy should cover common injuries to parts like wrists, ankles, knees, shoulders, and collarbones. Head injuries, when they occur, are more severe.

Collision coverage addresses the damages that accrue upon collision with another vehicle, obstacle, or a rough patch of terrain. Comprehensive coverage has more extensive scope for risks like theft, fire, or flooding.

This coverage is ideal for users who employ their bikes to more activities than leisure rides. If a rancher makes use of their bikes to travel across their property, it is best to insure it well so that it is repaired quickly.

If you have fitted your model with aftermarket accessories, a standard policy does not cover these additions, and it can frustrate you if you damage your bike. A customization coverage will accommodate the extra additions to your vehicle.

This coverage is optional, and it protects both a rider and their bike. In the situation that an underinsured or even an uninsured rider causes a crash and is unable to pay the rider or meet the damages to their bikes, this coverage will meet the financial liabilities arising from the event.

The Cost of Dirt Bike Insurance

Dirt bike insurance policies typically come cheaper than motorcycle coverage policies. You can get policies for less than $100 annually. Unlike standard motorcycles, dirt bikes are prohibited from roads and highways and riders generally spend lesser time on them.

Dirt bikes also rank as less powerful. Some motorcycles even pack power into the ranges of 1,400cc. In comparison, dirt bikes optimized for racing can pack as low as 450cc.

The affordability of dirt bike policies means that you are better off cushioning yourself from any liabilities, injuries, and damage to your machine.

Motorbikes, like motorcycles, are eligible for several discounts. Some common discounts include those of buying multiple policies. Equipping some form of an anti-theft system can attract discounts.

In practice, only a GPS locator and a radio qualify a bike owner for this discount. Most firms will levy a 10% discount if the policyholder has an expert install the device.

Some companies can also institute a discount if a rider finishes a safety course, although it is less common than it is for motorcycle users. Try to engage the insurance firms you have running policies with including auto and homeowners, not only for convenience but for bundling discounts.

Dirt biking is a hobby, and insurance only adds costs to the adventure. Fortunately, dirt bike insurance is affordable, and some firms will be generous with discounts when you include it in an existing policy. Most dirt bikers view insurance as unnecessary, although they regret this dismissal in the face of an accident.

Riding your bike only on tracks will protect you from any liability of colliding with another rider in a closed-racing scenario. You will not foot any damages that accrue from crashing into spectators or fellow riders during racing. If you are on trail riding, you are liable for any third-party damages.

When it comes to damage coverage, bikes get banged up as crashing is part of the sport. Dents and scratches are considered as part of the adventure and not damage. Damage coverage is involved in the cases where the bike is a total loss.

Dirt bikes are typically more affordable than motorcycles, and most riders chose to forego dirt bike insurance. The sport is, however, quite risky since it unfolds over off-roads.

There is a chance you will injure yourself or other riders or damage your bike and others as well. Most firms provide some level of protection for dirt bikes under motorcycle policies, but dirt bikes have specific needs that need their own policies.

Getting a dirt bike insurance will ultimately depend on you. It can offer you peace of mind while still presenting the hassle of interacting with insurance companies.

Most riders take a chance and operate without one, although when an incident takes place, they wish they had a policy.