There are a number of reasons why some people choose dirt bikes while others settle for all-terrain vehicles (ATVs) for their off-road adventures. But what matters the most is what they are looking for in terms of convenience, flexibility, and maneuverability. 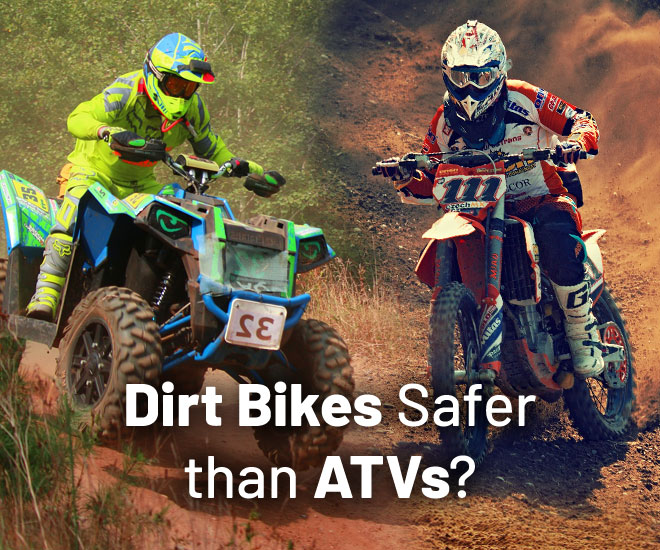 Are Dirt Bikes Safer than ATVs?

As an adrenaline junkie, you will definitely come to the agreement that none of the two automobiles is better than the other when it comes to enjoying fulfilling off-road rides.

Speaking of safety, do you think dirt bikes are safer than the ATVs? Before you draw your conclusion on the subject matter, it is important to look at every aspect of safety when riding either a dirt bike or an ATV so that in the end you will be able to tell which one between the two is safer.

Contrary to the expectations of many people, death cases resulting from ATV riding are higher compared to those that are caused by riding dirt bikes.

The latest research findings from John Hopkins University revealed that the victims of all-terrain vehicles accidents were at 50% more likely to succumb to the injuries sustained than those for dirt bikes crashes.

During the research, it was established that the victims of ATV crashes were 55% more likely to end up in the hospitals’ intensive care unit (ICU) and 42% on ventilators than those victims of dirt bike riding.

The studies were carried out by comparing data derived from the National Trauma Data Bank whereby a staggering 60,000 patients with injuries from ATV accidents and dirt bikes crashes were examined between the year 2002 and 2006.

Researchers are not quite sure why ATV accidents are more prevalent and deadly. However, statistics still show that 60% of the injured motorcyclists had helmets at the time of the crash compared to 30 % of the injured all-terrain vehicle riders.

Unfortunately, researchers rule out the possibility of helmets accounting for those huge differences. This is due to the fact that ATV riders sustained serious injuries more than dirt bike riders, regardless of both victims wearing helmets.

Other underlying factors that pointed out clearly as to why ATV accidents were fatal include the heavy weight of most ATVs, which were likely to crush and cause serious injury to fallen riders.

On the average, an ATV weighs more than 600 pounds but their manufacturers have so far managed to resist the stability standard that is meant to significantly bring down the number of rollovers.

These findings are contrary to the belief that any 4-wheeled vehicle is safer than those with 2 wheels. In conclusion, the researchers agreed unanimously that riding ATVs is so dangerous than what was previously assumed to be.

It is an undisputed fact that all-terrain vehicles are more steady than dirt bikes. While this statement is true, the stability of ATVs is not a guarantee for their safety.

It is true that an ATV can stand on its own (keep in mind that it is a four-wheeler) and you can easily learn how to ride it, but when it comes to its safety the story is completely different.

This notion gives riders a false impression and a sense of security, thus leading to fatal accidents.

These four-wheelers go too fast, try to negotiate corners too quickly and go over surfaces at very high speeds leading to accidents. Perhaps some people will recommend using helmets as one of the necessary safety gears when riding an ATV but it doesn’t help much.

Furthermore, when compared to dirt bike riders involved in accidents while wearing their helmets, ATVs are still more dangerous in a crash compared to off-road motorcycles.

Despite the fact they feel more stable, these four-wheelers have a tendency of flipping from time to time. This is attributed to their center of gravity, which is too high hence subjecting these quads to frequent rollovers.

More often than not, dirt bike riders break their bones and get injured frequently. During the crash, the dirt bike riders are usually thrown clear of their bikes. Even though the bikes don’t hit the riders (just in case), the good news is that these bikes weigh less than 200 pounds.

Therefore, their accidents are not as fatal as those caused by all-terrain vehicles. This means that ATV accidents are somehow serious and scary at the same time.

Even riding these four wheelers slowly over an even terrain can make them flip or roll over easily. When this happens, these vehicles are likely to fall on top of their riders. And the thought of a moving 1000 pound ATV weight on someone can be quite traumatizing, to say the least.

These observations give a clear picture of how it looks like whenever an accident occurs as a result of ATVs flipping and falling on top of their riders.

It doesn’t mean that only the ATVs are responsible for causing the most scary accidents one can think of, dirt bikes too can be dangerous as well if not handled with a lot of care.

ATVs are More Dangerous to Young

Believe it or not, age also plays an important role when it comes to the safety of riding either an ATV or a dirt bike. This is actually an interesting observation given that ATVs have been found to be dangerous especially to riders who are below 16 years of age.

According to statistics, young people are safer when riding dirt bikes compared to when they are riding four wheelers. Why is the case? In most cases, the accusing finger is directed to the parents.

Some parents allow their kids to start riding ATVs that are considered to be of the wrong sizes for them. For instance, you will be surprised to find parents buying ATVs for their 10-year-old kids without even considering the size in relation to their ages.

Parents resort to purchasing full-size ATVs in the hope that they will not have to spend more money buying others when the kids attain the right age.

While this is a good way of saving for the future, it may not be a wise idea, especially where safety matters are concerned. Full-size ATVs for youngsters is a potential threat to their safety and should be discouraged by all means.

Apparently, dirt bikes crash more frequently than all-terrain vehicles, especially when riding on rugged and uneven terrain. However, this fact should not confuse you to think that ATVs are safer than dirt bikes.

As mentioned earlier, their crashes are more serious although they occur occasionally. And if they occur, the victims of their crashes sustain serious injuries or even die in the process.

But if you are looking forward to enjoying your leisurely rides around your farm, on trails or uneven terrain without pushing your limits, then you should consider acquiring a four-wheeler.

These little vehicles are more comfortable and safer when you know you are not going to jump, ride faster or push beyond limits. Otherwise, you may consider going for a dirt bike if you feel that you have what it takes to ride faster or push the limits.

There are a number of disparities arising from the use of safety gear between ATV riders and dirt bike riders. Not all states or countries impose the same laws when it comes to the use of these four-wheelers and two-wheelers.

The most interesting part is that a good number of states have put much of their emphasis on using helmets when riding a dirt bike as opposed to the use of ATVs.

In such states, helmet laws have increasingly become mandatory for dirt bike riders and extremely rare for all-terrain vehicle riders. On top of that, most of the ATV riders overlook the idea of wearing protective gear when using these vehicles.

These two reasons explain why there have been rising cases of fatal accidents from ATV users. To some extent, protective gear plays a significant role when it comes to the safety of riders and can help prevent some injuries when an accident occurs.

From the discussion above, it is evident that dirt bikes are safer than all-terrain vehicles. This is true given that statistics point out that ATVs are more likely to cause serious injuries or even death than dirt bikes.

Some of the reasons attributed to this worrying trend include the weight of the ATVs versus that of dirt bikes, the speed, stability, maneuverability, safety gear and the recommended age for riders.

In addition, some states have different laws governing the use of ATVs and dirt bikes, and this could be one of the major safety concerns.

In a nutshell, dirt bikes seem to be safer than ATVs although motorists are highly encouraged to take safety measures into consideration every time they are out there enjoying their rides.