Motorcycling can be fun if you have the right bike. For kids, owning a dirt bike is like a dream come true given that these little individuals are full of vigor and ready for any adventure however thrilling it may look. And to make their fantasy a reality, the right dirt bike is all they need. 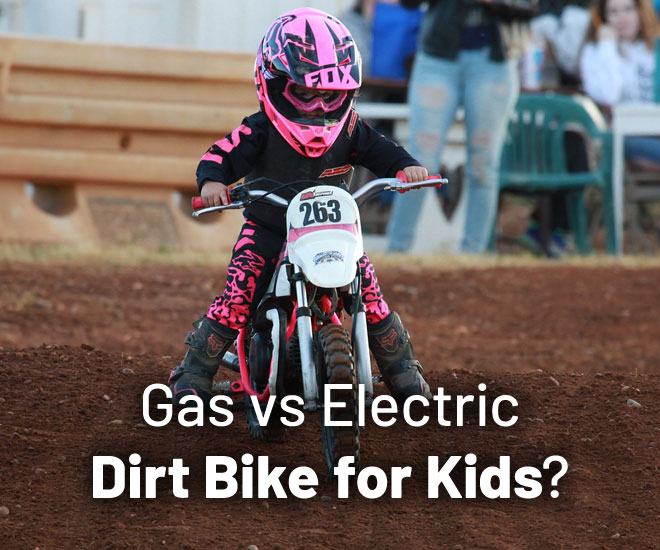 But that should not be any of your worries at the moment because you will get everything you need to know about electric and gas dirt bikes for kids in this article. Read on and find out more.

Before you make up your mind to settle on electric dirt bikes, you need to have a full understanding of how they work and their design. To begin with, electric powered dirt bikes have fewer moving parts internally.

This is because there is a simple electric motor that initiatives rotary motion to drive the rear wheel through the sprockets and chain. In addition to that, there is no combustible fuel needed, no choke to fiddle, no mess and no pull-start for the starting procedure in case of difficulties.

During their operation, electric dirt bikes for kids are quieter with just slight noise originating from the moving chain and slight humming of the spinning electric motor.

These features make these bikes to be more residential friendly and less susceptible to the ever strict law enforcers in case you’re found riding them along the bicycle path.

Electric dirt bike motor is torquey, meaning that it can provide better power offline in comparison with gasoline power. These motors don’t require a warm-up procedure for them to work perfectly. Most significantly, they can keep on running provided that the battery still holds a charge.

Electric dirt bikes for kids are rechargeable battery powered and are recharged using most of the electrical outputs when connected to the mains.

These lithium batteries are actually giving gasoline a run for their money in terms of pricing and higher efficiency. This is quite an improvement when compared to the earlier days when electric motorbikes were still one step behind.

Given that electric dirt bikes run on electricity, when you buy one the whole package will come complete with a charger and built-in lithium batteries.

Unlike gas dirt bikes that require you to refill them, electric bikes need you to charge their batteries and you are good to go. In other words, these bikes will save you a lot of money that you would have spent if it was gas dirt bikes.

When it comes to reliability, the whole story changes completely as far as riding electric dirt bikes is concerned. The fact that these dirt bikes for kids are operating on batteries, it will surprise you to learn that they cannot travel far when you compare to the gas bikes of the same size.

For instance, a single charge of six hours is likely to enable your electric bike to cover about five miles which is a shorter distance than what gas bikes can cover.

But this is good news especially for newcomers and young children taking to riding as their hobby. Electric dirt bikes are recommended to beginners and kids alike because they run at a reasonably lower speed, unlike the gas bikes.

From time immemorial, burning gasoline to power motorcycles has been a common trend and this seems to go on for many years to come. This is attributed to the fact that these bikes operate with the help of their internal combustion engines that give them a better platform since the early years of the 20th century.

In fact, these types of dirt bikes were the first ones to be used and their popularity seems to be increasing exponentially.

Essentially, the gas-powered dirt bikes run on two or four-stroke engines that are designed to cover many miles and hours without getting damaged.

In a layman’s language, gas-powered dirt bikes are designed to be literarily subjected to endless abuse while serving their intended purpose. All you need to do is to pump some fuel into it, switch on the kill switch and before you know it you will be motion.

Since gas dirt bikes come in either two or four stroke-engine sizes, you should be fully aware that they provide slightly different user experience, to say the least.

Starting with the two-stroke engine bikes, you will discover that they are lighter than the four-stroke engines and consume less fuel. On the flip side, the two stroke engines are less stable and tend to have more back-end smoke.

The general rule of the thumb states that the bigger the size of the engine, the higher is the fuel consumption. This means the four-stroke engine sizes consume more fuel and they are costly.

On the other hand, the larger the dirt bikes the more efficient and fast they are, simply because larger engines mean higher speeds especially in racing dirt bikes for kids.

It has been established that gasoline power plays a very crucial role when riding the dirt bikes in remote areas. This statement means that if your dirt bike runs out of fuel you can just add more to the tank and resume with your adventure.

There are also cases of noise coming from the engines and for some riders, this could be a major drawback but others will find it fascinating. In the real sense, there is still nothing as interesting as twisting the grip throttle and feeling the rumble from the bikes internal combustion cycle.

Besides, you can use your experience to teach your little ones about the changes in oils and spark plugs including other important things by simply using the sound produced by the bike when riding.

On the other side of the coin, the rumbling sound and noise from dirt bikes could turn out to be a nuisance, especially in some closely knit residential areas. Normally the noise produced by gasoline engines can be disruptive to some extent let alone being downright annoying.

Finally, the maintenance of gasoline engines is yet another headache if you don’t have any knowledge of mechanical engineering.

For those with prior knowledge and experience in mechanics, maintenance of gas-powered engines is just a piece of cake for them but to an adult who doesn’t know how to go about, it can turn out to be an exercise in futility.

Which one of the two categories would you choose? To make the right decision when it comes to choosing between electric and gas powered dirt bikes, you need to look at the positive and negative aspects of each type of bikes.

Here is a simple list of the advantages and disadvantages of electric and gas powered dirt bikes:

From the differences highlighted above, you can now make the right choice of the dirt bike depending on the features and design.

Whether you choose an electric or gas dirt bike, you can rest assured that your kids will enjoy riding their bikes.