Motorcycles are the dominant vehicles when it comes to fast two-wheels, but some dirt bikes can hold out their own in terms of speed. Granted, dirt bikes are rated for other attributes that are more important than speed, including suspension and the power levels of the gears. 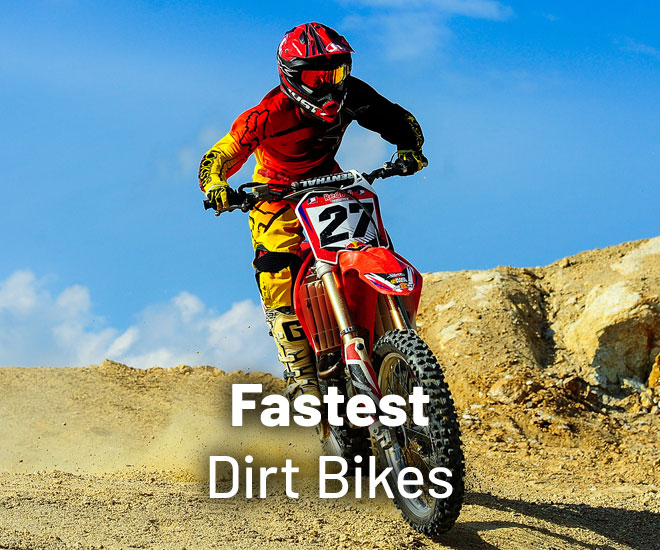 You may be tempted to see how fast your model can go when you are out doing jumps and climbs on dirt roads to make your experience more exhilarating. If you want a particularly fast dirt bike, consider the following options:

The Honda CRF 450R is a legendary model in motocross, even though it is not the fastest on this list. It tops at 87 mph (142km/h), which is not too shabby.

Honda continues to implement minor changes on the CRF 450R since it underwent a significant overhaul in 2017. The 2019 model, for example, features upgrades on the pistol oil jet, clutch lifter, HRC launch control, brake pads, and exhaust.

The upgraded model has better power and balance thanks to the tweaks and changes. The battery box has been fitted 28mm lower in the chassis to reduce its center of gravity and improve balance.

Honda has also included its definition of traction control through the new Selectable Torque Control.

The Honda CRF is among the best models you can get in the 450 class as it puts power to the ground.

The Yamaha WR is quite popular in the dual-sport segment thanks to its superb performance both on-road and off. ‘WR” identifies it as a wide-ratio gearbox that allows it a reasonable balance of off-road and on-road responsiveness.

The model will top at 88 mph, and while it is not particularly a fast bike, enthusiasts appreciate its lightweight and agility. You will however have to wind it up quite tight to achieve high speeds.

The engine will comfortably power speeds of between 110-120 km/h making the bike ideal for long-distance explorations.

The chassis is forged from aluminum, and the tapered swingarm makes the model look like a race bike. The seat is quite tall at 36.6 inches, and short users might need to use upping blocks.

There is a low-fuel light, but the entire display is small.

The Yamaha WR may be more expensive than the competition, but you get an aluminum chassis, fuel-injected motor, and fully adjustable suspension.

The Kawasaki KX450 is a dominant model in motocross. It is packed with sophisticated technologies that make it not only fun to ride but also exhilarating.

The 2019 Kawasaki KX model features upgraded suspension, frame, and body. It revs out father than before and is much easier to ride than previous models.

The dirt bike provides the Standard, Soft, and Hard choices to change the power delivery as determined by the terrain.

It is impressively stable in tough sections, and the adjustable handlebar mounts and peg mounts promote rideability.

The bike features the Dunlop Geomax MX3S tires that function extremely well on the track. Its shock will handle harsh landings comfortably, and you can finetune with low- and high-speed compression damping tweaks. There is also minimal harsh bottoming even on rough G-outs.

The four-stroke engine on the Kawasaki KX powers speeds of up to 89 mph. Its impressive performance on motocross championships makes it a solid racing bike for any enthusiast.

The 2019 and 2020 models of the KTM SX-F promise more power on the road. The bike lets you enjoy the torque of a powerful engine like a 450 cc but on a slightly lower scale that is easier to control.

The bike also includes a sophisticated Keihin engine management system for extra user-friendliness. The engine recovery time for the bike is less than that of the 2019 model, and it also requires a little less clutch work.

The bike’s rigid frame helps it to stay on a straight-light on throttle, and its rear end remains connected to the road even when accelerating out of extended sweepers.

Transmission is also incredibly smooth thanks to the Pankl, and you only need to perform an upward or downward motion with your foot.

KTM made significant changes to the bike’s suspension settings in 2020, and users can easily set up the model to suit their riding ability and style.

This bike is, by all means, a racing model. The more you rev the motor, the faster it gets, and its lightweight makes it comfortable for long rides.

The Kawasaki KLR is a dual-purpose bike with the most capability on dirt roads. The model is also incredibly resilient, having survived the 80s, 90s, and 2000s.

If its technology feels a little analog, therefore, it is because it dates a few decades back.

At 432 pounds, the Kawasaki KLR is quite heavy with a horsepower of 42. The instrumentation on the bike is not fancy, and the orange gauge needles bring about a 1980s style nostalgia.

The throttle is stiff and mechanical, and it has square indicator lights. Users can easily view the gauge displays since they are suitably-placed above the bars. The fender will prevent dirt from flying to your face, and the plastic fairing is solid.

A 651 cc four-stroke engine powers the bike, and it can top speeds of 98 mph. It will fire on the first try thanks to the bike’s reliable capacitor-discharge (CDI) ignition system.

Engine maintenance is made easy with the constant-velocity carburetor.

The Kawasaki KLR is quite off-road worthy despite that the fact that is keeps it low-tech.

The Husqvarna FE 501 is a reputed and competitive segment in the motorcycle community. It will suit off-road enthusiasts who want a serious machine with impressive engine performance.

The 510- cc engine may weigh only 29.4 kg, but it provides formidable performance in any terrain. It features a standard electric start, electronic rider functions like traction control, and a 6-speed wide ratio gearbox. Users can easily finetune the bike to fit their skill levels.

The gearbox encourages smooth and accurate shifting while the gear lever’s design prevents dirt buildup. The bike is packed with advanced technologies to improve rideability.

The Dampened Diaphragm Steel (DDS) clutch, for example, makes the clutch pull quite light. You can also enjoy more traction and durability thanks to the model’s integrated damping system.

This model is a real off-road beast while still packing important street-legal components. Its 2.2- gallon tank will power your adventures through the elements, and you can adjust it to your riding tastes.

The Mz Baghira is a dual-purpose offering with a premium build quality. The first thing to note about this bike is that the seat is very tall.

The 930mm seat height provides the required suspension travel and ground clearance to negotiate your way through dirt roads. You can comfortably ride the bike in the standup position because of the wide handlebars and footpegs.

The bike’s power is contained in the four-stroke Yamaha 650cc engine that produces 37 horsepower at 6,500 RPM. You can breeze to speeds of 102 mph (164 km/h) with a bike that can handle all kinds of terrain.

The five-valve cylinder head is arranged in a Dual Overhead Cam setup with a 9.2 compression ratio. The engine also features water cooling, electric starter, and a counterbalancer.

The bike’s capable suspension system can handle rocks and stumps just as well as it can ride on asphalt.

The bike can handle two passengers, and it is ideal for exploring the mountainsides over the weekend.

Honda’s XR 650L line soldiers on, despite having little changes done since it was introduced in 1993. The Honda XR stays capable multiple years on to be one of the most reputed dual-sport bikes in the market.

The suspension is as capable as it was when the bike was first rolled out, and you also get colossal ground clearance and suitable off-road tires. Despite these decades-old components, the bike holds out its own on trails, city streets, and dirt roads.

The Husqvarna TX 300cc stroke features off-road capabilities, and it is light, fast, and modern. Its engine’s shaft organization is designed to centralize oscillating mass while a counterbalancer shaft decreases vibration.

Just below the engine is an electric starter for protection. To keep up with the compact design of the engine, the Li-Ion battery used is 2.2 pounds lighter than a standard battery.

A 6-speed wide ratio gearbox well complements the off-road design of the bike. Another commendable feature on the TX 300 is the 38mm Mikuni TMX carburetor that offers smooth delivery over the entire RMP range. The bike’s maximum speed is 112 mph (180 km/h).

THE Aprilia RXV 5.5 may weigh 303 pounds, but it surprisingly rides light. Unlike most dirt bikes that come with a single-cylinder arrangement, this model opts for a v-twin engine.

Its compact and slim frame makes it a joy to ride it in the dirt road, but its unorthodox features failed to make it a sales success.

Suzuki DR-Z400SM is the Supermoto module of the brand’s DR-Z line. It has more on-road capabilities than off-road, but it provides commendable performance on dirt roads if you are committed to changing the tires.

The bike is characterized by a lightweight chassis and a slim frame. The thin-walled tubing is forged from chromium-molybdenum alloy to provide durability as the bike cruises through the elements.

The model is powered by a liquid-cooled 398cc engine that utilizes the DOHC system to actuate its four-valve heads. The 29mm exhaust and 38 mm intake valves are adequately large to open the combustion chamber.

The engine produces 39 horsepower and 25 lb-ft of maximum torque. Its peak speed is at 114 mph, although the bike will be most comfortable at lower speeds of 94 mph.

The bike’s acceleration is also notable as it can achieve 0 to 60 mph in 4.54 seconds.

Overall, the bike is more suited for city traffic as it leans more to on-road use.

The KTM 450 SX-F is best known for propelling Ryan Dungey to Motocross championship. Its powerful 449cc engine is only 237 pounds, but it can power top speeds of 123 mph.

The model is fitted with professional technologies that will only make your riding more intense. The Keihin management system allows for electronic fuel injection and a 44mm throttle body.

You can expect maximum engine performance and immediate responsiveness on the road.

If you want speed and power, the KTM 450 SX-F is the approved benchmark for dirt-bike riders.

The KTM 450 SX-F remains the fastest dirt bike in the market. Other brands like Husqvarna, Suzuki, Honda, Kawasaki, and YAMAHA also have a notable presence on this list.

The Kawasaki KLR is a surprising contender considering its analog characteristics while the MuZ Baghira holds out its own despite the brand’s absence in the market.

In addition to speed, you should also lookout for a lightweight frame, excellent handling, and a capable engine when choosing a dirt bike to buy.