Husqvarna 701 Enduro is what many would call a masterpiece of engineering. This model was created with both performance and practicality in mind, without foregoing the modern sleek design Husqvarna is so well-known for. The high-grade chromium-molybdenum steel makes for a lightweight, easily controllable frame. 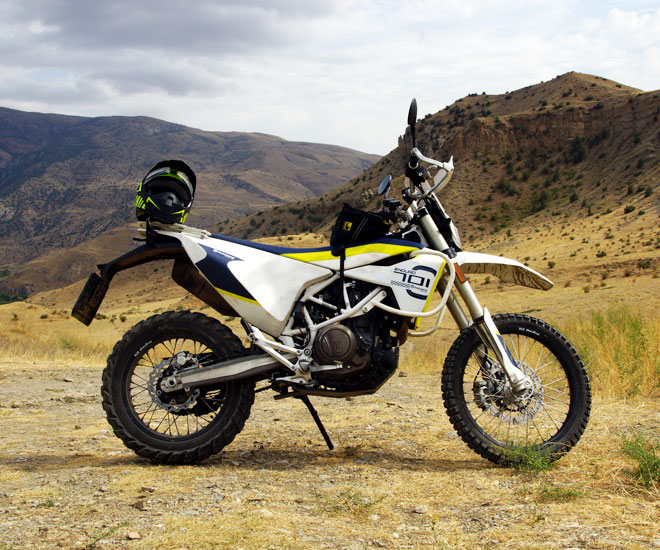 The APT slipper clutch allows the user to reach greater speeds while maintaining maximum control and rear-wheel stability. This, combined with a smooth down-shifting effect, makes the 701 perfect for rugged terrain and turns, but also on-road riding.

There are a lot of good things to say about this Husqvarna model. However, all dirt bikes can present some issues. No dirt bike will run perfectly forever. Eventually, due to wear and tear, issues can arise. So, let’s take a look at some of the most common problems to be aware of.

The Enduro 701 model comes equipped with a light adler power torque clutch. It has major advantages over standard slipper clutches. Most notably, it allows you to achieve greater speed with maximal rear wheel grip. It also gives you great control and smooth down-shifting.

With a hydraulic clutch like this one, you won’t have to worry about clutch cable problems. However, the slave cylinder is a common issue with hydraulic clutches. Enduro 701 is also vulnerable to such problems.

The slave cylinder is crucial for hydraulic clutch actuation. The working mechanism is simple enough. When the piston pushes into the slave cylinder, the cylinder will lift the pressure plate. However, sometimes, things can go wrong.

It’s normal for CSC to acquire small damage, wear and tear over time due to frequent use. Sometimes, CSC problems might also be a result of other factors such as a broken seal which causes fluid leaks, contaminated brake fluid, or dirt and fluid buildup in and around clutch components.

The ride-by-wire throttle on the 701 Enduro has the perfect response and smooth power delivery. The sensors control the fuel and air supply going into the engine so you always have the perfect fuel to oxygen mixture for clean combustion. However, you can still get issues with the throttle, the most common one being bogging.

When the dirt bike starts bogging when you turn the throttle, you’ll notice a change in performance. Acceleration won’t be as smooth, your engine might sputter, and you might notice a diminished throttle response at higher PRM.

Bogging can happen for a variety of reasons. Most commonly, the cause is either a wiring or fuel problem. Kill switch wiring, thyristor ignition wiring, or spark plug wiring can wear down over time, eventually causing a short that leads to the bogging effect.

Bogging can also be a result of not getting enough fuel, or the jetting being too lean. A dirty or clogged-up carb, spark plug, or air filter can be another cause. Cleaning the jet and the carb regularly, and replacing the air filter can help prevent this issue. You should also ensure that you jet the carb properly.

This is a common issue on both 2 stroke and 4 stroke bikes. The Husqvarna 701 Enduro is also vulnerable to this problem. While this might seem like the most difficult problem to solve, the causes are usually easy to manage.

Most common factors for starting problems include a weak or dead battery, a dirty carburetor and/or air filter, or gas and jetting problems. A dead battery is the first most likely cause for electric starter dirt bikes like the 701. A dirty carb is also common as it doesn’t take a lot of buildup for the carb to start clogging.

A dirty carb or ail filter can also affect the oxygen to fuel ratio and lead to combustion problems. If the bike runs too rich because of a dirty air filter or carb, you’ll have difficulty starting a bike and the bike might not idle. That’s why it’s a good idea to replace the air filter and clean out the carb regularly.

When it comes to jetting, the pilot jet is also very quick to clog. Because it’s so small, gasoline residue can build up easily. A clogged pilot jet can create the opposite effect, resulting in a very lean air to fuel mixture. Cleaning or replacing the pilot jet can solve this issue.

A bike overheating is bad news. In this state, high and prolonged heat exposure can damage the engine, the piston rings, and spark plugs. When overheating, liquid-cooled bikes like the Enduro 701 might leak coolant out of the overflow tube.

This can also lead to lower power. All liquid-cooled bikes need constant airflow to cool down the coolant. The common causes of overheating are related to user error. Riding slowly and poor clutch control can create heating issues.

Moving at a slow speed won’t allow enough air through to cool the coolant and radiator. A slipping clutch can also lead to overheating. In the case of hydraulic clutches, a slipping clutch might be caused by low clutch fluid.

Another common cause of overheating is a lean running dirt bike. If the engine runs on a mixture that’s too lean, especially if this is done for a prolonged time, it might start to overheat. Gasoline keeps the engine cool. With not enough fuel and too much air, you won’t have that same cooling effect.

Gas leaks require immediate attention. They can lead to the clogging of various bike components, and they also constitute an obvious safety hazard. There are multiple possible causes for gas leaks. Usually, the issue has to do with cracked or worn-down caps, seals, or gaskets.

A punctured or cracked gas tank filler cap can create leaks when the tank is full or when the bike is moving. Cracked or loose fuel lines are another potential cause. Fuel lines are made of highly resistant rubber, but that doesn’t mean these components can’t still get damaged with time.

If there isn’t any visible crack along the fuel line, perhaps the leak comes from the end fittings. Loose clams can’t seal and hold the fuel lines in place, so gas ends up spilling around the edges. Worn-out injector and carb float seals also lead to the same issue.

A broken or dirty carb float needle can also make gas leak out of the overflow tube. Such problems occur when the float needle is unable to do its job properly— that is, sealing the float. When the float lifts and the needle can’t seal it, you’ll get a gasoline leak.

With an incredible maximum power output of 55 kW at 8000 RPM and torque at 73,5 Nm at 6,500 RPM, this dirt bike’s performance just speaks for itself. If you’re looking for the perfect mix of power, stability, and flexibility, then the 701 Enduro might be the perfect choice for you! With just 1 handlebar switch, you can adjust the engine power on the spot, switching from on-road to off-road mode in an instant.

Whether you want smooth or sporty, a flexible wheel slip, or high stability, you have it all in just one neat package. Given its impressive specs and performance, it’s safe to say that the Husqvarna 701 Enduro is a high-quality, highly reliable dirt bike.

The problems outlined in this article are just some things you might want to be aware of. However, the rate of clutch, engine, or other similar problems isn’t any higher in this model compared to other dirt bikes. In fact, compared to most other models, the 701 usually comes on top.