Launching a jump on a dirt bike is one of the exciting things about the sport, but it is also quite challenging. It will take perseverance and practice to be a master at jumps. A level of instruction will be essential as with any stunt, as there is no tried way of executing dirt bike jumps. 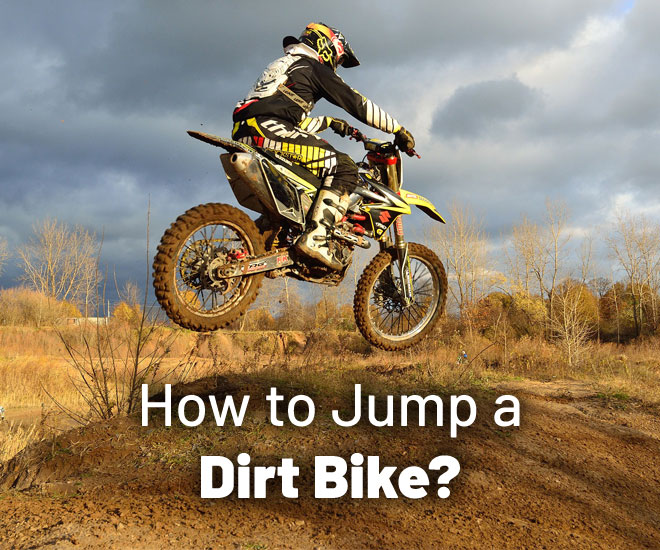 How to Jump a Dirt Bike?

Begin by getting acquainted with a few basic techniques then advance to some pro skills. Take it slow, and you will soon be doing doubles or triples.

Get a dirt bike model that is correctly suited for your weight. Keep in mind that jumps are dangerous so you should be well equipped with the right gear.

You may still get hurt if your jump is not successful, but body protection will limit the level of damage. Suit yourself up with a helmet, gloves, knee pads, boots, neck brace, and chest protection.

Steps to Jumping a Dirt Bike

– Get to Know the Jump

You should get familiarized with the jump before any speedy attempt. You can walk across it or ride slowly with your bike. The idea is to know what your line of sight will be when you get on the track and what you will expect.

Using your bike to ride over the jump will also warm it up. Try standing up on your pegs as you ride to foster confidence when riding.

You can also watch another rider perform the jump if it is possible to estimate the speed at which you will do the jump.

– Warm up the Bike

Avoid jumping your motorcycle cold. Mechanical hiccups with the bike’s engine at startup can make jumps difficult and also contribute to injuries.

Ignite the engine and leave it for a few minutes, and then take your vehicle for several laps. This action will let the dirt bike expand and settle properly.

With a warmed-up bike, ride over the jump you intend to do slowly without going airborne. Locate a small jump to steadily boost your speed as you continuously ride over to first get the front wheel off then both of the wheels. You can use small elevations and ramps in the track.

When starting to do jumps, it is a good idea to be in an environment where you are not crowded by other riders, especially more experienced crowds.

You will benefit from the opportunity to ride at your own pace. Check if the local track for private hour sessions.

Body positioning is a crucial element to the take-off and landing. You should be in a standing posture. Use your knees to grip the bike and keep them bent. Additionally, hold the elbows out.

Position both the head and shoulders over the handlebars above the forks. Your upper body should be about 45 degrees relative to the ground. Squeezing the bike with your knees and calves will ensure that your feet do not fly off the pedals as you approach the jump. Your position should feel stable and relaxed.

Sufficient momentum is required to make a jump. This does not necessarily mean that you should ride full throttle in high gear. Approach the jump in a single line as hitting it at an angle for a novice may be risky to pull off. Jumping at an angle could kick out the rear of your bike.

Select the gear you will jump in. The third gear may be a good option. You should refrain from changing gears when you get close to the jump or mid-jump. If you are going to change gears, do it before you hit the up-ramp.

Using an even throttle is a good idea, and you can accelerate slightly as you leave the ramp-up. Getting the hang of throttle controls on your bike will take some effort and practice.

Maintain a steady grip on your throttle after you achieve the intended speed and keep it through the jump.

Easing off on the bike’s throttle too soon will likely send a rider into a nose-dive, and accelerating quickly can facilitate you to enter a risky mid-air wheelie.

Always lean forward as you approach the up-ramp and as you leave the ramp as well to prevent going over backward when contacting the ground. You should be standing up at this point in the jump.

A rider’s entire body weight should ideally be in front of their foot pegs, with the body as near to the handlebars as it can get. Standing up affords you more control while your legs will function as additional suspension on the landing impact. If you are sitting as you land, the shock will be absorbed by your spine.

You will need to have a solid idea of how gears work and listen to the sound of your motor. Low gears, like the third gear, work effectively when approaching jumps because they increase the rotations per minute of the bike in addition to making it more responsive.

To shift up, let off on the throttle briefly while squeezing the clutch as you use your foot to push up on the bike’s gear shift peg. Downshifting will involve pushing the peg down. Don’t use the gas or the clutch in midair.

Watch for the landing zone once you jump. Let your knees absorb the blow and maintain your arms at length to ensure that your chest is not close to the handlebars. Wrists should be kept straight to prevent spraining them when landing.

The rear wheel should land first followed by the front wheel. Landing is quite risky as once you leave the ramp, the only way to go is down. As you land, keep the knees squeezed tightly. Accelerate slightly before landing to keep the motorcycle in a straight line.

A step-up is a simple elevation in the track’s level. Begin by riding over a step-up steadily without going airborne. The idea is to get used to the abrupt change in elevation commonly encountered in standard jumps.

Practice by accelerating enough so that you go airborne before landing on the top of the set-up. You can try step-downs by moving from a higher elevation to one that is lower.

This jump involves a take-off, an elevated plateau, and a landing. Ride over the tabletop slowly several times before approaching it faster to get airborne. Ensure that you maintain smooth throttle control.

After mastering tabletops, you can attempt more complex jumps. With doubles or triples, you will develop a keen sense of distance and timing. As you become more seasoned, you can practice double or triple jumps simultaneously rather than attempting every part of the jump separately.

Dirt biking may be a dangerous adventure, but the risk increases with the inclusion of stunts. These risks include:

It is quite possible to go over backward as you are taking off from a jump. It will happen if you accelerate significantly as you head to the up-ramp and leave the ramp.

Pulling up the handlebars during acceleration will worsen the situation. You can either hit the ground hard or land awkwardly, and it can result in bruises and broken bones.

Mastering dirt bike jumps means getting good at landing. Landing badly can mean seriously hurting yourself. You can land in another area than the safety zone you had scouted.

– Colliding with Other Riders

Collisions between riders are frequent during dirt bike jumping. This is mainly because riders suffer from blind summit. If a fellow rider crashes on a landing on the opposite side of the jump, you will likely miss them when making your own jump until it is too late.

If you happen to crash on a jump on a track where other riders are performing stunts, get out quickly and clear your bike too. If you are unable to do this, get on top of the jump, and warn other riders.

– Performing an Endo as You Land

If you land with your front wheel, particularly if your bike is facing very far forward, there is a risk of doing an endo. An endo happens when the bike goes end over end, and you will likely go over the handlebars as well.

Doing jumps is one of the exhilarating things that dirt bikers get to experience. Like with any stunt, however, it needs technique and practice. When learning to execute jumps, it is vital to start small.

Work on things like body positioning, braking, and throttle control as you progress. You will fall several times in your quest to be a master jumper, but protective gear will minimize injury.