The KTM 690 Enduro is appropriately nicknamed the “ace of all surfaces”. If you’re looking for a highly flexible dirt bike that can handle both rugged terrain and smooth on-road riding, this model is the perfect fit for that! 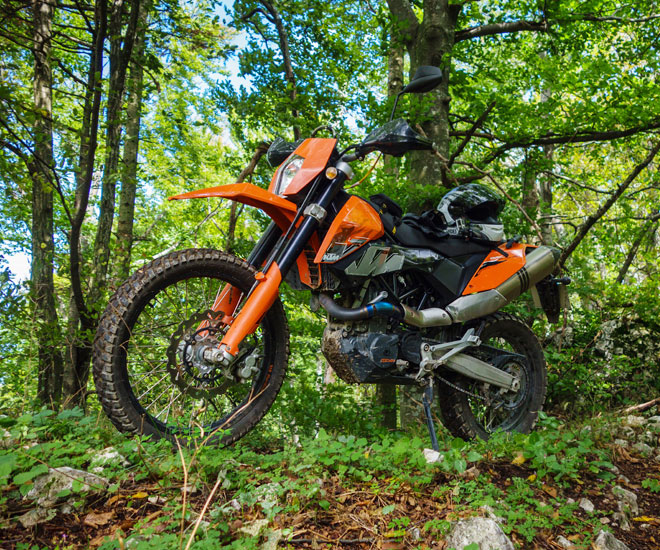 Thanks to the ride-by-wire system and its highly sensitive sensors, the 690 Enduro provides superior throttle control, perfect for smooth rides. The power assist clutch prevents rear wheel lock-up and makes quick-shifting easier than ever.

Still, there are some things you might want to be aware of. This model is vulnerable to the same issues that any dirt bike might have. If you’ve already had a dirt bike for a long time, these won’t come as a surprise. If you’re new to this and don’t know what to expect, keep reading! Today, we’ll look over five typical problems with the KTM 690 Enduro.

Fouled spark plugs happen more often in 2 stroke bikes. But it’s not unheard of in 4 stroke dirt bikes either. It can happen in any type of bike, especially if the spark plugs are worn out. The typical lifespan of spark plugs is around 10,000 miles. But problems can arise even before this mark.

Spark plugs can get dirty due to a variety of reasons. Most commonly it’s due to rich jetting, a clogged air filter, and prolonged idling or slow driving. When you’re running a bike on a rich fuel mixture, all the excess unburned fuel can leak through the engine, fouling up the spark plug. Rich jetting and a clogged air filter usually go hand in hand.

When the filter is dirty, not enough air can pass through, leading to a low air and high fuel concentration. Idling and low-speed driving don’t necessarily lead to fouled spark plugs. But they don’t prevent them either. When driving at low speed, the spark plugs don’t get heated enough to let the excess fuel slip off, so it starts building up around the top ends.

Less common causes include damaged piston rings and engine cylinders. In these instances, fuel can leak and reach the combustion chamber, where it can coat the spark plug heads. While the first issues can be fixed by replacing the air filter and cleaning the carb, if you have damaged components or worn-down plugs, you’ll need to replace them.

If your dirt bike has inconsistent idling or stops idling altogether, the most probable cause is an unbalanced fuel mixture. This can happen when the fuel and/or idle screws aren’t properly adjusted. Other causes include a dirty air filter and a clogged pilot jet. Let’s take a closer look at these issues:

The engine requires three ingredients to make combustion happen. It needs fuel and air (in the right ratio, might I add), and a spark. If any of these ingredients is missing, the bike won’t start. The most common causes of a dead bike then have to do with the spark plugs, the pilot jet, and the carb.

Poor jetting can cause a lot of issues, one of which is failure to start the bike. Lean jetting won’t provide enough fuel for the dirt bike to start. Similarly, rich jetting can easily flood the engine and prevent your bike from starting. Eventually, when the air concentration is too low, you won’t get any power at all. Properly jetting your bike is the first thing you have to learn to prevent this issue.

A dirty carb can also prevent your engine from working properly. When there’s too much buildup inside the carb, the air and fuel can’t make their way to the engine. Similarly, a dirty air filter won’t let enough air pass through. Either way, you won’t get enough air, fuel, or both to make combustion happen.

Speaking of combustion, your engine might not start if you’re missing the magical ingredient, i.e. the spark. Malfunctioning spark plugs are another common cause of a dead engine. The first thing you’ll have to do is check to see if the spark plugs are fouled or worn out. Sometimes, they just need a little cleaning to work properly. However, if the terminals are damaged, you’ll need to replace them.

Leaking coolant has two main causes. Your bike might be overheating, or the radiator is damaged. In the case of a damaged radiator, the most common issue is a broken head gasket. When the head gasket is damaged, the radiator can’t withstand the pressure, letting the coolant leak out.

But the radiator can get damaged in any other location. You can get cracks along the upper tank, the lower tank, the radiator core, or the drain pipe. In other cases, the coolant can leak out of the overflow tube even if there’s no visible damage. This happens when the engine is overheating.

When the engine gets too hot, the temperature of the coolant goes up until it reaches the boiling point. Once that happens, the liquid starts steaming and it comes out of the overflow. The pressure inside the cooling system is supposed to prevent the coolant from reaching boiling point.

But under the wrong conditions, the coolant can still get too hot. In that case, the hot coolant that reaches the engine won’t have enough time to return to the lower radiator tank to be cooled, so it will just start boiling.

Overheating can happen in any dirt bike. But it’s a problem you want to solve asap. An overheating engine can cause problems down the line, especially if running for too long. You might first notice lower performance, such as lower mileage or harder shifting.

Over time, various bike components like the piston rings or the spark plugs can get damaged due to the heat. There are some common signs that your engine is overheating, besides the obvious higher temperature. A hot dirt bike might lose power, and it might also start leaking coolant out of the overflow tube.

The most common cause of an overheating engine is low-speed driving and prolonged idling. Liquid-cooled bikes need constant air flowing through the radiator fins. This keeps the coolant temperature from reaching boiling point.

In turn, the coolant can complete its loop from the radiator to the engine and back, preventing the engine from overheating. But when driving slowly, the radiator doesn’t get enough airflow to bring down the coolant’s temperature.

Fouled spark plugs, starting and idling problems, leaking coolant, and engine overheating are the most common issues you might encounter in this model. They’re actually quite common for all dirt bikes. Some issues are inevitable due to wear and tear after prolonged riding. The KTM 690 still remains highly reliable and offers amazing performance.

These problems aren’t any more likely to occur in the KTM 690 Enduro than in other bikes. It’s just something you could expect down the line. Keep in mind that many of these issues can be prevented. Replacing the air filter and spark plugs every 10,000 miles and cleaning the carb regularly should keep starting and idling issues at bay.