Riding your favorite motorcycle feels good especially when you are on a highway. You can showcase your skills or maneuver your way around to avoid traffic jam in order to reach your destination in time.

Those are just a few positive attributes that motorbikes come with especially for seasoned riders. But have you ever thought of the negative part of riding motorcycles? 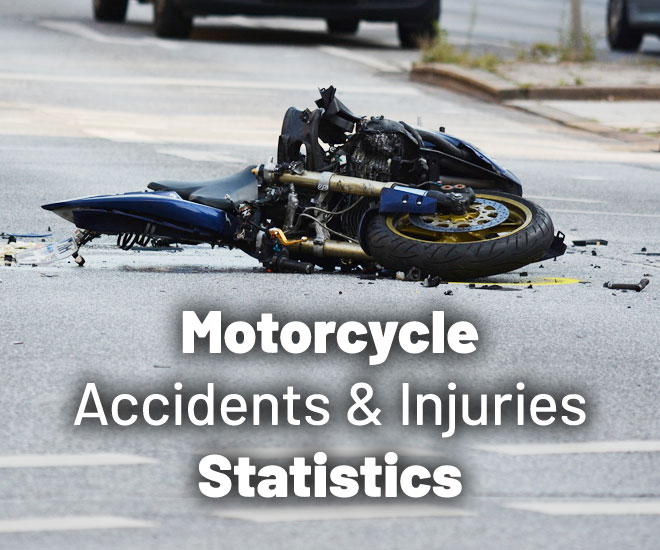 By nature motorcycles are less crashworthy in comparison to closed vehicles. In fact, they are less visible to other motorists as well as pedestrians and unstable than cars, buses or any other four-wheel vehicle. This is to say a lot of care is needed if you want to avoid fatal accidents.

Riding motorcycles is not for the faint-hearted or learners. But it needs a combination of mental and physical skills unlike driving a car. Apart from that, motorcycle riders and their passengers are vulnerable to the harsh weather and hazardous road conditions, unlike those driving closed vehicles.

Even though safety is paramount and relevant authorities are trying to reinforce laws governing the use of motorcycles as a means of transport, still there are accidents happening year-in-year-out. In real sense, accidents are inevitable in this era of over speeding vehicles and reckless motorcycling.

This article is going to take you on a fact-finding mission about major causes of death in motorcycle accidents, head injury statistics and crash injuries resulting from such accidents, and safety measures to make sure that motorcycle riding remains safe.

According to the Insurance Institute for Highway Safety-Highway Loss Data Institute (IIHS-HLDI), the federal government says that for every mile covered in 2016, the total number of reported deaths resulting from motorcycles was almost 28 times than that of cars.

In fact the year 2017 witnessed a staggering 5,172 motorcyclists losing their lives in crashes, translating to a 14% of the total motor vehicle crash deaths.

Take a good case study in the US where around 8.5 million motorbikes are already registered, according to the information from the US Department of Transportation.

This is really shocking statistics if you are a seasoned motorcyclist. Often times cars or other vehicles take wrong turns that lead to 42 % of fatal accidents involving motorcycles.

It happens mostly at intersections where motorists waiting for clearance from the traffic lights take a wrong turn without even realizing the coming motorbikes. What happens next? Obviously, a speeding motorbike crashes into the car leading to serious injuries or even death.

Reckless driving and bad behavior on the road are major causes of deaths in motorcycle accidents. In 2012, 34% of motorbike accidents were as a result of over speeding.

Inasmuch as modern motorcycles try to come up with new features that enhance safety and speed on the road, still that cannot prevent accidents from happening.

Moreover, the latest motorcycles have been designed with larger engines that enable them to have unimaginable accelerations and speeds, leading to an increase in the number of fatal accidents.

No wonder the statistics in 2017 show that 33% of motorcyclists died from over speeding and most of their bikes had 1,400 cc or even larger and powerful engines. Apart from that, it was reported that 28 % of motorcyclists deaths in 2017 occurred due to driving while under the influence of alcohol.

Clearly, this shows how careless motorcyclists can become given that motorbikes offer no protection when involved in accidents, unlike cars.

Lane splitting is another cause of deaths resulting from motorcycle accidents. It happens more often than you can imagine especially when the motorcyclists decide to move from one lane to the other when there’s a traffic jam.

The same way lane splitting contributes to fatal accidents for motorcycles is equally the same way traffic conditions make motorcyclists to get involved in accidents.

This is a common occurrence especially during rush hours where everyone is in a rush to get back home or arrive at their intended destination on time.

For a motorcyclist, this is a very dangerous moment because of huge traffic leading to confusion and carelessness among motorists.

If you are not careful enough, you may get involved in a fatal accident that might leave you with severe injuries or death.

Motorists have a tendency of not concentrating on driving when on the road This is the same case with most of the motorcyclists. Given that motorbikes are always at high speeds, a little deviation can lead to a serious accident or death.

Similarly, you could ram your motorbike into a tree, a car or find yourself in a ditch with broken limbs. Such cases can be avoided only if you concentrate on your ride and avoid being distracted.

Others can cause less visibility and for motorcyclists, this can be critical as far as riding bikes is concerned.

Other dangerous conditions include slopes, uneven pavements, potholes, and oil slicks, chunks of rocks or gravel and defective shoulder lanes among others. Always keep your eyes open and ride your motorbike with a lot of care.

Motorcycle accidents, especially head injuries are not necessarily a common thing compared to vehicle accidents, but they can be more devastating and shocking. Studies and surveys have revealed some interesting statistics regarding motorbike accidents, with most of the attention directed to the head injuries.

According to the Insurance Institute for Highway Safety and National Highway Traffic Safety Administration (NHTSA), 5,286 people died from motorbike accidents in 2015 and this was up by 5.1 % from 5,029 in the year 2015. Most of the deaths occurred as a result of head injuries, with a large number of victims found not using helmets at the time of the accident.

The table below shows the number of 6,646 motorcyclists who had suffered head injuries resulting from accidents.

In the end, it was established that wearing helmets was 35% effective at minimizing head injuries when motorbike crashes take place. Here is the table:

The next table below shows the outcome from the multivariable logistics regressions with much of the emphasis laid upon head injury after motorbike crashes. From the table, it was established that most of the head injuries occurred because of some underlying reasons.

Different people invest in motorcycles because they have a passion for showcasing their riding skills in a manner that gives them unparalleled feelings of freedom and unmatched thrill when riding down the road.

Little do they know that an innocent motorbike ride may culminate into a tragic end. This is due to the fact that motorcyclists are faced with unique risks as well as dangers most of the time.

Sadly, when the crash takes place, it is often more catastrophic compared to a car accident. This should not scare you to the bones if you own a motorbike but it is just a precautionary measure that can save you and others as well.

Therefore, it is always important to prepare mentally and psychologically with the dangers arising from riding your bikes on the road or elsewhere. Learn more about the following motorcycle crash statics so you may be fully aware of how the situations look like just in case of an accident:

Motorcyclists are at risk of getting injured or even killed

According to the research conducted by the Insurance Information Institute, those riding motorbikes are 5 times more likely to get injured than those in cars. This due to the fact that motorcycles offer less protection than cars and other vehicles.

The fact that you can use a helmet and other specially designed clothes for riding motorcycles, it doesn’t mean that you are as protected as someone driving a car under the protection of seatbelts and airbags. This means that motorcycle crashes are more dangerous than car accidents.

A large percentage of motorcyclists still don’t use helmets

Much to your surprise, statistics show that an estimated 50% of those riding motorcyclists do not wear helmets most of the time.

On the other hand, 40% of those motorcyclists killed during the accidents don’t use helmets as their protective headgear. Using helmets can help reduce fatal injuries on the head when a motorcycle crash occurs.

There’s a misconception out there pointing at younger motorcyclists as being reckless and careless but statistics tell a completely different story. Older motorcyclists are more at risk of getting involved in accidents than their younger counterparts.

A 2015 report by the National Highway Traffic Safety Administration indicated that 54% of those motorcyclists killed in accidents were at least 40 years old. This represents a 17% increase in motorcycle crashes among the older motorcyclists since 2006.

A simple explanation of this worrying trend was attributed to the decline in the older riders’ vision and time to react to different situations. Additionally, older motorcyclists have a tendency of purchasing larger bikes which can be more dangerous in case of a collision or crash.

It is estimated that the US government spends about $16 billion a year on motorcycle accidents. This is according to the Government Accounting Office (GAO).

As a matter of fact, this figure covers emergency medical services including other medical expenses like rehabilitation, surgeries, and mental health counseling.

In addition to that, there is a loss of productivity which is estimated by GAO to be more costly than all medical expenses for the motorcycle crash victims combined.

This accounts for nearly 44% of the total cost incurred after the accidents as opposed to 18% for the medical cost.

How to Make Motorcycle Riding Safe?

Some injuries occurring from motorcycle accidents can be avoided in one way or the other. Therefore, make your motorbike riding safety your primary concern by doing the following:

All these tips can help you stay safe and sound every time you use your motorcycle anywhere. Remember, your safety is more important than reaching your destination in time.

Riding your motorcycle can be fun and enjoyable at the same time let alone helping you reach your destination on time.

But a lot of care is paramount given that motorbikes are dangerous and can cause fatal accidents or deaths. Therefore, take precautions and stay safe while enjoying riding your motorcycle.