Rake, trail, and offset are the most vital concepts relating to the rideability of any motorcycle. The offset does not have to be included in all models, but where it is applicable, it helps to regulate the riding attributes of the bikes in ways that are not easy to achieve.

Motorcycle handling is made complex by all the weight distribution and geometry involved. Even if a rider is super-experienced, they can find themselves unable to control some models, simply due to the way they handle it. The foundation of the handling of a bike is in its design, which comprises of the rake, trail, and offset. 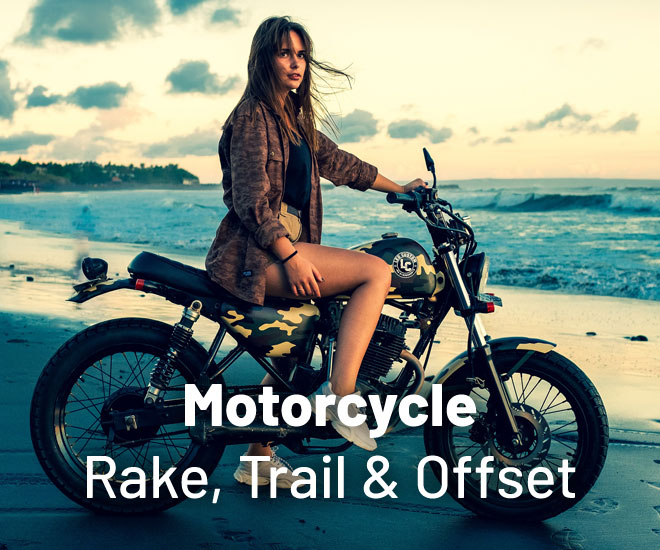 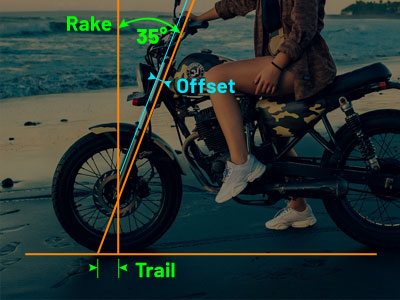 The rake of a motorcycle is sometimes termed as the “fork angle”. This name is not accurate, however, as the rake is a variable calculated to the steering head and not the fork or fork legs.

The rake as a number represents the angle between two imaginary lines. The first line is vertical and it runs to the riding surface, passing via the center of the bike’s front wheel.

The second line passes through the steering hub’s center and is among the characteristics of the frame, and not the fork.

The angle between the two lines is referred to as the rake or rake angle. It plays a crucial part in the handling characteristics of a bike, and it is usually regarded that the responsiveness of a bike’s handling is inversely reacting to the rake angle values.

The smaller the rake angle, therefore, the more agile a bike will be.

Sportbikes are designed to steer quickly, and they are purchased with a smaller wheelbase and smaller turn radius. These fittings enable the bike to perform fast tracks around sharp bends.

Most high-performance sportbikes are additionally fitted with steering dampers to boost their high-speed stability.

Most choppers, baggers, and cruisers sport a bigger rake angle straight from production. Larger rakes facilitate high-speed stability, even at the expense of cornering abilities.

The tradition in the motorcycle-building scene favors the wider rake angles and longer fork legs as “classic” components. The raked-out form will, however, not be ideal for really winding roads.

Standard rake angles can vary between 24 to 35 degrees. Some manufacturers have fixed values for specific line-ups, such that the bikes have consistent handling feeling through model years.

Basically put, the rake depicts how fast a bike will respond to the movement of its front wheel. A small rake represents an immediate reaction. Some bikers will describe a smaller rake angle as having the front wheel “nearer” to the bike.

To assist new riders understand the concept better, let us imagine a bike with a huge rake and long fork. Turning the bike to either direction will mean that the bike and the rider will take a long time and a lot of space to follow suit in that direction.

Visualizing the trail concept need a little more imagination. It is expressed as a numeric variable that represents a measure of length in centimeters or inches. The trail is inherently connected to the rake, and it plays an equally crucial part in the stability and handling of a bike.

In bikes constructed without an offset, the trail and the rake vary proportionally, that is the bigger the trail, the bigger the rake. Offset is actually an engineering solution to influence the relationship between the two concepts.

A trail can be thought of as a buffer zone in relation to the movements of the handlebars. In motorcycles with bigger trail values, the steering wheels functions almost like a caster, and the longer the supporting arm, the stronger the wheel’s force when it is attempting to realign with the direction of travel.

The steering effort that is needed to maintain the wheel in the new direction will also be much higher.

Bigger trail values represent stability. However, the extra trail takes handling back onto the less stable area. Bike designers and engineers are continually trying to narrow down the ideal combination for a specific purpose.

Trail and rake are not sufficient to determine the optimal stability of a bike. Other concepts come into play, including the suspension settings, the type of suspension, and the load of the motorcycle. Messing with the design of the bike may even result in a negative trail, which is not recommended.

The offset of a bike is controlled with several shapes of the triple tree, which is the piece that clamps the form tubes and which binds the front end to the frame. Triple trees are typically constructed from machined or forged aluminum and are among the vital parts of the steering assembly.

Offset impacts on the bike’s trail, that is the bigger the offset, the smaller the trail. If a motorcycle has little trail, it is recommendable to reduce the offset and maintain the steering in more manageable limits.

The offset can be altered with aftermarket triple trees, which have yokes that are manufactured differently from the stock OEM kinds, although the same result can be gotten with varying steering head axles. Offset is mainly used as the primary component for adding maneuverability to custom motorcycles.

Extremely long forks can have an adverse impact on a bike’s handling, and designers utilize special trees to rectify the figures while preserving the aesthetics of their designs.

The offset can be thought of as a “tool” for impacting the trail while leaving the rake intact. If you determine that your motorcycle requires adjustments, your best bet would be to involve a specialist.

They will be more empowered to do appropriate calculations and identify the trail and rake values that will ensure the stability of your machine. In extreme cases, you can end up with a negative trail which translates to significant efforts in maintaining directional control.

The Relationship between the Three Concepts

How to Alter a Bike’s Rake, Trail, or Offset?

What situation would necessitate an adjustment in these values? If you intend to ride through mostly straight trails, you would not want your arms getting tired by continually adjusting and holding the motorcycle in a straight line. In this case, it is better to reduce the rake and increase the trail.

This is the reason why American choppers sport long front forks for that straight-line stability. You will do the opposite if you are more interested in handling around corners.

Innovations like steering dampers make it possible to have a very low rake while still keeping the motorcycle stable by stiffening the steering movement. The dampers can be sourced as after-market parts.

Altering is also ideal for people who still want to maintain the performance of the engine and the look of the bike but want to adjust the handling.

You do not have to be an expert or even a mechanic to adjust the steering geometry since it can be implemented in several simple ways. Keep in mind that you are the rider of the motorcycle, and you are determining your safety as you alter the values.

If you get a bike with forks that are quite long, for example, you can have them replaced with shorter forks to not only lower the rake but to also enhance the handling around corners.

A bike’s trail and rake are also influenced by other factors in addition to the frame of construction, including:

When riding a motorcycle, the suspension travel and braking will also substantially alter the trail and rake. If you brake hard on the front, for example, the suspension will compress under dive and decrease the rake and trail, and most probably induce wobble in the machine.

Keep these potential situations in mind as you implement the alterations as you could end up dealing with negative figures in extreme braking situations. Also, pillion or heavy luggage on the rear may slightly impact your trail and rake values. To be safe, alter the rear suspension preload.

The adjustments may seem unnoticeable and negligible at slow speed, but the impact will be very obvious at high speeds in ways like reduced straight line visibility.