The many kinds of motorcycles in the market can easily make people confused when deciding to buy one for their outdoor pursuits. While dirt bikes are prevalent, their smaller cousins, the pit bikes, are enjoying a growing market. 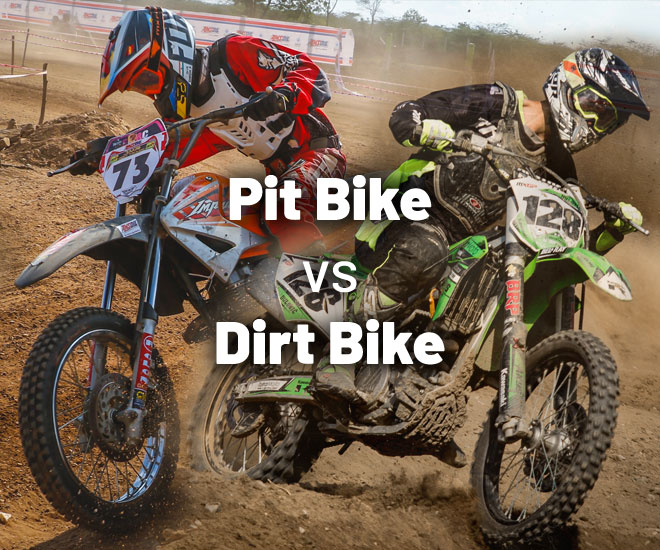 Pit bikes were initially designed to get around in the pits (garages), but they have since been modified to compare more favorably to regular-sized dirt bikes.

Dirt bikes are suited for off-road trails, and they are capable of higher speeds than pit bikes. The differences between these two kinds of motorcycles are further discussed below:

In a 4-stroke motor, it takes four-piston motions to make a complete engine cycle. Every stroke provides propelling energy, and the output is steady and reliable.

It then makes sense to have controllable power for a bike designed for children and teenagers. Pit bikes are also easier to operate thanks to a smoother powerband.

Dirt bikes can either be two-stroke or four strokes. In two-stroke engines, the piston makes two movements in a complete engine cycle. Such bikes have a higher rate of acceleration that is perfect for tracks, but they are harder to control.

Four-stroke dirt bikes, on the other hand, have higher “maximum speeds” than their two-stroke counterparts, and they are more suited for racing and street riding.

The four-stroke engines used in dirt bikes are more powerful than those fitted in pit bikes. Four-stroke dirt bikes commonly range between 300-400cc, and some can even reach 750cc.

Pit bikes have smaller frames, and it is this lightweight and compact body that allows them to maneuver through confined pit courses. Pit bikes are also low, which disqualifies them in most off-road trails.

You need a big bike to clear any obstacles on the way, which makes dirt bikes ideal for off-road riding. If you take a pit bike on a track meant for dirt bikes, you will only damage the mechanics of the model and put yourself in harm’s way.

You can, however, use a pit bike on a clear and plain trail. The smaller frames of pit bikes make them ideal for children and teenagers, or short adults.

Dirt bikes are bigger than pit bikes, but they are more challenging to store and move as a result. They are safer to take on dirt roads because they have a bigger frame to clear obstacles.

Dirt bikes are not designed to tackle narrow courses, hence their regular-sized bodies. Dirt bikes also come in a range of sizes to accommodate the various heights of riders.

The kinds of tires that are fitted on dirt and pit bikes are optimized for the terrains that these bikes are mostly used on.

Dirt bikes are typically used on off-road trails and street roads. Their knobby tires allow them to handle rough terrains, from mountain tracks to standard streets. The tires keep the engine higher from the ground and give the bike higher speed abilities.

The tires on dirt bikes are cushioned by an outer rubber surface that maintains the grip needed to cruise on rocky surfaces. Dirt bikes can subsequently move easily on sand, mud, and dirt.

These tires complement the smaller bodies of the bikes, and they are more suited to smooth trails and clear tracks.

Suspension systems link the wheels to the bike’s mainframe. Shock absorbers are part of this system, and they cushion riders against bumpy rides.

Pit bikes do need the more advanced suspension that is witnessed in dirt bikes.

Pit courses do not have the kind of bumps found in off-road tracks, and these bikes can, therefore, get away with having an inferior suspension. Dirt bikes, on the other hand, need to keep their wheels in direct contact with the ground and will require better suspension.

The suspension system will however vary between dirt bike models. Motocross dirt bikes for example have an excellent long-travel suspension to handle high jumps at top speeds.

The smaller size and weight of pit bikes also mean that they have less torque. Even if you had a pit and dirt bike with similarly-sized engines, the pit bike would still be less powerful than the dirt bike.

A 50cc pit bike will typically reach maximum speeds of 15 to 25 mph on short trails in lower gears. On longer sections, the bike can reach top speeds of 50 mph. Pit bikes with larger engine sizes of 140cc and 160cc can reach speeds between 70 to 75 mph.

You can increase the speed of pit bikes with simple modifications and without affecting low-end torque acceleration. You would need to replace the stock 14-tooth drive sprocket with a 15-tooth sprocket.

While you can also replace the stock 42-tooth rear sprocket with a 32-tooth sprocket to increase speed, you will compromise the low-end torque acceleration.

Dirt bikes are capable of incredibly high speeds, which is why they are popular in racing. On the lower end of the spectrum, 50cc dirt bikes that ride at a speed range of 25-40 mph. 400cc dirt bikes can reach 87 mph, and they are best left to professional riders.

Pit bikes are safer because they are slower, and they are generally ridden on smooth roads. Pit bike racing also takes place in controlled quarters, while dirt bikes are often used for adventure.

You can expect some cuts and bruises while using pit bikes, but serious injuries are common among dirt bikers. Pit bikes are suitable for children, teenagers, and beginner riders, while dirt bikes need a higher skill level because of the associated risks.

All bikes are noisy, although two-strokes are noisier than their four-stroke counterparts. Dirt bikes are especially loud because of their high RPMs and short mufflers.

Whichever model you are riding, however, you can expect noises that will disturb your neighbors.

Pit bikes start at considerably lower prices than dirt bikes. You can even get used pit bikes at just $200, while new ones rarely exceed $1200.

The prices of dirt bikes vary widely because of the many brands in the market. The costs range between $2,000 to $5,000 for quality models. Some dirt bikes can even reach $10,000 in purchase value.

Pit and dirt bikes also differ in maintenance and upkeep costs. Dirt bikes are quite an investment, and you will require to do a lot of upkeep.

The components of dirt bikes are also more expensive since they are more advanced than those on pit bikes. A set of radiators, for example, can set you back a couple of hundred bucks.

Four-stroke dirt bikes generally need less upkeep when compared to two-stroke models. In a four-stroke engine, all the pieces are involved during movement, and you will, therefore, have more components to service than in a two-stroke motor.

A four-stroke pit bike can, therefore, become expensive to repair because of the many parts involved. If you keep your model on clear trails and perform necessary upkeep, it should be easy to maintain it.

Dirt Bike or Pit Bike – Which to Choose?

Dirt and pit bikes all have their pros and cons, and it depends on your needs.

If you intend to engage in off-roading, you are better off with a dirt bike. Pit bikes cannot be ridden under similar conditions like their bigger cousins, and you will be restricted to smooth and plain trails.

With dirt bikes, however, you can adventure through mountainous and desert regions. These models have the speed and power needed to cruise through rough terrains.

If you are a beginner, or you are not yet confident enough to ride a dirt bike, a pit bike may be a good way to familiarize yourself with the track.

A pit bike rides just like a dirt bike, meaning that the skills you learn on the former will be transferred to a regular-sized bike. Pit bikes are also suitable for children and teenagers since they are safer.

Another critical factor is the accessibility of a riding community. Dirt bikes are generally seen as tougher and are more popular among adults. You are more likely to find a dirt biking community near you than a pit racing one.

Pit bikes are mostly seen as ‘training wheels’ and are commonly used by the youth. Pit bikes are, however, a more laid-back motorcycle as dirt biking can get intense and competitive.

In conclusion, a dirt bike cannot be used in place of a pit bike and vice versa. The model you get should be able to suit your preferences.