The Razor MX350 and the MX400 are both scaled-down electric bikes for younger riders. Both of them have speeds of 14mph, which is enough for your juniors to live out their off-road fantasies. 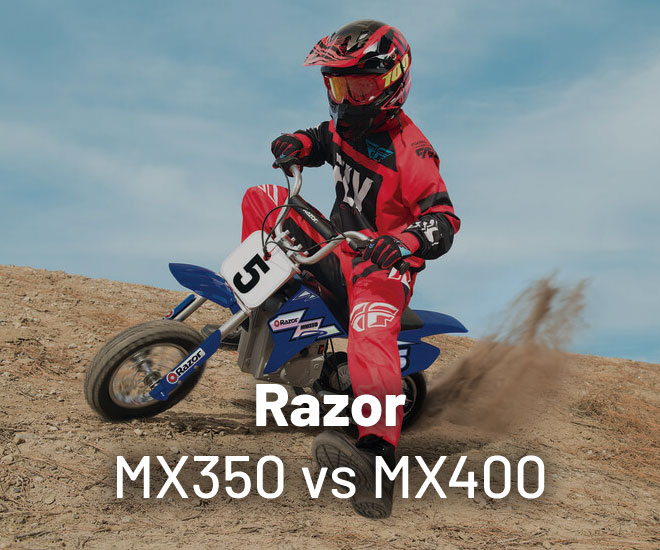 These two models are quite popular as first bikes for kids, and you will be torn between which one to take. They have minor differences between them, and it is up to you to decide which one to purchase.

The MX350 and the MX400 go by differing names in the market, so there have to be some distinctions between them, which include:

Color is the most visible differences between the models. The MX350 comes in the colors black and blue while the MX400 can be bought in either red or green. You can choose either of the models based on the colors your little one likes the most or which one they will respond to the most.

When it comes to release dates, the MX400 is the newer of the models. Being a newer version, the MX400 features upgrades and improvements. There is always a benefit in buying a newer model, but you should examine the differences with the previous version to see if they are worth it.

Customer ratings are an essential consideration when buying machines like dirt bikes. It should not be the only consideration, however, as preferences differ between customers.

You will find less customer review online about the MX400 model, but customers seem to particularly like that the bike is easy to assemble and use.

The MX350 model has lots more reviews online, most of them are positive. Customers reported that even though the minimum age recommended by manufacturer is 13 years old, the bike is already too small for a 9 year old kid.

Price may or may not impact your decision when buying any of the models because they are in the same price range.

The MX400 costs a little more by virtue of being the newer model, and you need to decide if the upgrades on the bike are worth the extra dollars you will spend.

Each of the models is optimized for use by kids. They weigh 65 lbs so you are sure that children can handle the bike on the road. The models feature hand-operated brake system, an adjustable riser handlebar at the front, and a twist grip throttle.

The models are recommended for ages 13 and over, although users have complained of the bikes being too small for juniors in this age group. The 140lbs. limit is also confusing as it is not ideal for older riders.

Most online reviews conclude that the riders are younger, as young as five years even. The manuals suggest letting kids on the bikes on your discretion, that is only allow your little ones on the bikes if you are confident that they are adequately skilled.

Both versions have a stainless steel construction for their frames and plastic for the bodies. Plastic may not be the most durable, but these models will handle frequent use. They are fitted with 12ʺ knobby tires for dirt roads.

It is up to you to identify where your kids will ride the bikes since they are not ideal for public streets or trails. A good area would be a flat ground with such loose debris as gravel and rocks.

The models feature similar torque and a chain-driven electric motor that is sufficiently powerful. The bikes are single-speed, that is they deliver the same speed and acceleration regardless of how hard the throttle is twisted.

They can reach speeds of 14 mph, which is safe for kids. The bikes can run for around 30 minutes with a charging period of about 12 hours. The battery installed in the bikes is 24 Volts sealed acid battery.

The MX350 and MX400 are designed to be quiet so you can be sure that your kids will not disturb the neighbors when having fun.

All the features and the specifications of the MX350 are identical to the ones on the MX400. The major difference is color, which largely depends on preference. If you are keen on price, the MX350 is the cheaper model, albeit only slightly.

How to Choose a Dirt Bike for Your Child?

Dirt bike champions start at an early stage. If you intend to introduce your kids to the sport, you can start with toy-like bikes before upgrading them to bigger machines.

Electric dirt bikes gained popularity as alternatives to gas-powered models for kids. The early versions of the bikes had cumbersome SLA batteries which made the models heavy, in addition to having less-powerful engines.

Advancements have, however, made the bikes a force to be noted. More brands are joining the electric dirt bike market, including Yamaha and some models can even perform better than some gas-powered bikes.

Razor is among the leading producer of electric dirt bikes, and their MX series is quite popular. The bikes are budget-friendly, safe, and relatively durable. Consider the following when buying an electric dirt bike for your junior:

Different electric dirt bikes are optimized for varying age groups. You will need to be keen on the recommended age for a particular model. Most manufacturers over-estimate the suggested age for their products. The MX350 is, for example, advocated for 13-year-olds, but in practice, the bike can be used by juniors between five and ten.

You need to gauge your kid’s maturity and skill-set to know if they would handle the model you intend to buy. Do a test run before buying the bike.

The battery life will also inform your purchasing decision. A model that does not preserve charge for long means that your kid will constantly have to stop or you will have to carry the bike if it loses power on the road.

Battery life informs riding efficiency as well as the money you will spend on charging it. Purchase a battery from the same brand as the bike if possible. Chargers will either be portable or plugin, and you can select one based on charging rate, quality, size, and brand. The versatility of the charger is an additional factor to look into.

You should also identify the size and weight of the bike, as small bikes are easy to handle for kids. Manufacturers also recommend a weight capacity for riders. A limit of 140 lbs. has, for example, been given for the MX350 and MX400.

The material of the bike is also noteworthy. The body of most bikes is mostly made of steel with a plastic body. The materials that make an electric dirt bike will impact on its durability.

The aesthetics also matters. Kids are excited by colorful toys, so keep it in mind when sourcing for a model.

When it comes to performance, determine the speed which the bike can reach. Moderate speeds are recommended for kids since they get the adrenaline rush while still being safe. The speed should ideally match your junior’s motor skills.

The model you buy should also be easy to assemble. Most manufacturers package their models semi-assembled so that you get it running in a few minutes.

Assembling the bike will also make you more knowledgeable on its systems so that you can troubleshoot in case there is an issue.

Electric bikes can feature an on/off switch or a hand-operated brake. The system needs to be responsive and easily accessible. Determine if the bike has variable speed settings or single-speed as in the case of the MX400 or the MX350.

Your kids will keep outgrowing their toys, and you do not want to overspend on a machine that they will stop using in a few years. In the case of the MX350, it is priced lower than the MX400 while still offering the same features. Examine the characteristics of different models and even various brands to get the most budget-friendly option.

Settle for an option that has a warranty in case your order malfunctions. Evaluate user reviews on online platforms to get unbiased information about the model you want to buy.

Dirt bikes have become safer, thanks to technological advancements. Getting your kid on an electric dirt bike that goes 14 mph and equipping them with safety gear will give you peace of mind as it gives them the thrill of the outdoors.

If you want to buy a Razor electric dirt bike for your kid, but can’t decide which model to choose (SX340, MX350 or MX400), I can tell you that they are pretty much the same.

There are slight differences in design and price. The MX400 is the most expensive, because it is the newer model.

These dirt bikes have really good quality, so it might be wort buying a used one. Though, if you can’t find a used Razor bike in your area, check out Amazon, because there you can find some really good deals too.